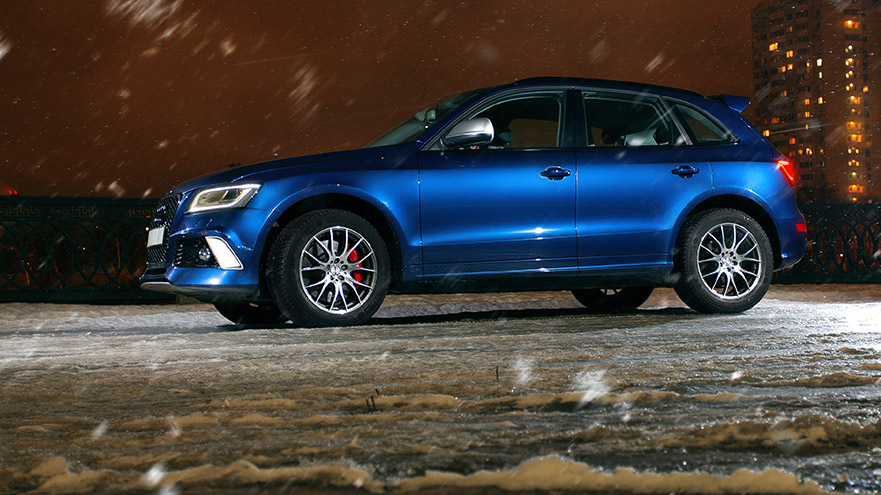 The cold weather has rolled around once again, and you may be thinking about getting yourself a car that can handle anything that winter has to throw at it.

Whether you’ve got a trip to the mountains planned or you have to negotiate snow in your day-to-day life, a reliable ride is key for keeping you safe on slippery roads.

Of course, a car that’s not only a strong performer in the snow but also provides a luxurious experience is even better, and in this article we take a look at whether Audis can add winter practicality to their reputation for making top-of-the-range vehicles.

Quick Answer: Are Audis Good in the Snow?

With suitable winter tires, many Audis are very good in the snow. All Audi models are available with Quattro, an all-wheel drive (AWD) system that automatically sends power to the wheels with the most grip, meaning that the cars have excellent traction in less-than-ideal conditions.

Keep reading to find out which Audi models make the weather outside much less frightful, as well as how they compare against other luxury car brands and some tips for driving in the snow.

Which Audi Models Are Best in the Snow?

The Audi A4 Allroad Quattro is a standout in this category, and was recently included in AutoGuide.com’s “Top 10 Best Cars for Snow”. The website highlighted features like the raised ride height working together with the AWD system and selectable Off-road Mode as giving the A4 Quattro a solid reputation when it comes to negotiating snowy conditions.

The A4 Quattro also featured in a similar “Top Five” list from Compare.com, which mentioned the excellent levels of traction when combined with winter tires, making the Quattro a reliable choice for slippery surfaces.

Another list of great cars for winter driving – this time from Cars.com – contained the 2021 Audi A5 Cabriolet, which the website described as an all-season convertible, largely thanks to its AWD that comes equipped as standard.

For the techies and those with a preference for environmentally-friendly cars, you might be interested to know that digitaltrends.com rated the Audi E-Tron as being the best electric car for driving in the snow. It has an electrified version of the Quattro AWD system, with an electric motor for each axle.

Which Audi Models Are Worst in the Snow?

Due to the Quattro AWD that Audi offers, most of their vehicles should be suited to driving in the snow.

But without the proper all-season or winter tires installed, the car’s performance will be limited: Quattro technology is great for getting you off the mark, but when it comes to turning or stopping, that’s where the tires really come into their own.

How Do Audis Compare to Other Luxury Vehicles in the Snow?

Now you know about the Audi models that fare the best in the snow, read on to find out how Audis compare to vehicles made by other luxury car manufacturers.

Audi vs. BMW in the Snow

Like Audi, BMW’s vehicles have AWD availability – either included with the car or available as an optional add-on, depending on the model – boosting traction and helping to stop the car from losing control in snowy conditions.

There isn’t much separating the two brands in snowy conditions, owing to the fact that both manufacturers have developed powerful AWD systems that are highly effective when combined with appropriate winter tires.

To try and separate the two, a YouTube channel devised a tug of war between an Audi A3 and a BMW 3 Series in the snow. The Audi had a stronger start, but then the two cars began to pull pretty equally.

In the same vein, “Tyre Reviews” pitted an Audi A4 Quattro against a BMW 3 Series xDrive in the snow, fitting both cars with the same tires in the interest of fairness. It turned out that not much separated the two cars at all – the Audi was a little better at accelerating on snow and ice, but the BMW was faster getting up a hill.

Audi vs. Subaru in the Snow

Subaru has a stellar reputation for AWD systems, and was pioneering in adapting it from specialized off-road vehicles for use in commercial cars, single handedly creating the sport utility vehicle market almost 10 years before the Audi Quattro came along.

Subaru’s cars all come equipped with its AWD system as standard, whereas it is an optional and more expensive extra on Audis. Therefore, many Audis may not actually be AWD, whereas all Subarus will be.

Certain Subaru models also utilize “X-Mode” technology, which sends power to the wheels that require the most traction in a given situation, boosting the car’s grip in snowy conditions.

Reflecting this, two Subaru models feature in both U.S. News’ and Kelley Blue Book’s rundown of the best cars for winter driving in 2021, but only one Audi appears in the former, and none in the latter. In fact, it is difficult to find a “best of” list on this theme that doesn’t include a Subaru.

Audi vs. Mercedes in the Snow

Like Audi, Mercedes has its own AWD system, 4MATIC, which does much the same thing as Audi’s Quattro.

The two systems are designed in slightly different ways, meaning that cars’ performances will not be identical but are close enough to make it hard to choose between the two.

Ultimately, the decision of which car is better in the snow will probably come down to which brand you prefer.

Audi vs. Volvo in the Snow

Understandably given the harsh winters in Sweden, Volvo is known for making reliable vehicles that handle snowy conditions well.

Like Subarus, Volvos often feature in lists of the best cars for winter driving, but how do they compare to Audis in that regard?

We were unable to find much data suggesting one way or the other whether a Volvo performs better than an Audi in the white stuff, but two Volvos, the S90 and the XC40, are extremely well-reviewed and often feature in the top cars for snow due to their AWD systems as standard.

How To Make Your Audi Better in the Snow

The most essential component that will drastically improve your Audi’s snow capabilities is the tires. Without winter (or at the very least all-season) tires, you won’t be able to use your Audi’s AWD system to its full effect due to not getting sufficient grip for the car to take off.

If you’re going to be driving in freezing conditions, it’s also important to consider smaller things that could become serious problems if something were to go wrong, for example the screenwash. Make sure you have the right concentration of additives in there in winter to prevent it from freezing.

If your Audi isn’t AWD, snow chains may be necessary in certain conditions. If you think you might have to use chains, practice putting them on and taking them off in nice weather so you don’t have to waste valuable time wrestling to get them on your wheels in the middle of a blizzard.

Do Audis Have Snow Mode?

Audis don’t have a specialized “Snow Mode” for driving.

They do, however, have five other driving modes to choose from: Efficiency, Comfort, Auto, Dynamic, and Individual.

You shouldn’t need snow chains if your Audi has winter tires and AWD. It is recommended to have either one or the other when driving in snowy conditions.

If your Audi isn’t AWD though, you will probably need some chains for each tire. This includes four-wheel drive cars, which you might have to fit chains to if the conditions are bad enough.

That being said, laws differ from place to place, and you may find yourself driving through somewhere where it’s a legal requirement to have snow chains in your car, even if they aren’t being used at that moment in time. So if you’re driving to a new area, don’t forget to check the regulations before you set off.

How To Drive an Audi in the Snow

Even if your Audi is equipped with the latest Quattro AWD technology, it is still crucial that you drive with extreme caution in the snow.

Avoiding making sudden maneuvers, braking sooner than you would on a dry road in summer, and driving more slowly are great ways to maintain traction and prevent sliding.

If you see the traction control warning light flash up on your dash, slow down by letting off the accelerator, not by hitting the brakes. This light appears when one or more of the wheels is sliding, so gently slowing down will help them regain traction.

Final Thoughts – Audis in the Snow

When properly equipped, Audis do a great job in the snow.

The perceptive Quattro technology means that power can be delivered to where it needs to be whilst on the road, without you having to lift a finger.

If you live in an area that gets regular snowfall or icy roads each winter, it is definitely worth considering the AWD upgrade when buying an Audi as it makes a big difference in performance on slippery surfaces.

Yet in these conditions it’s also important to remember the combination of AWD and winter tires to give you the best possible traction. Quattro is fantastic for getting you moving forward, but it becomes pretty irrelevant when stopping.