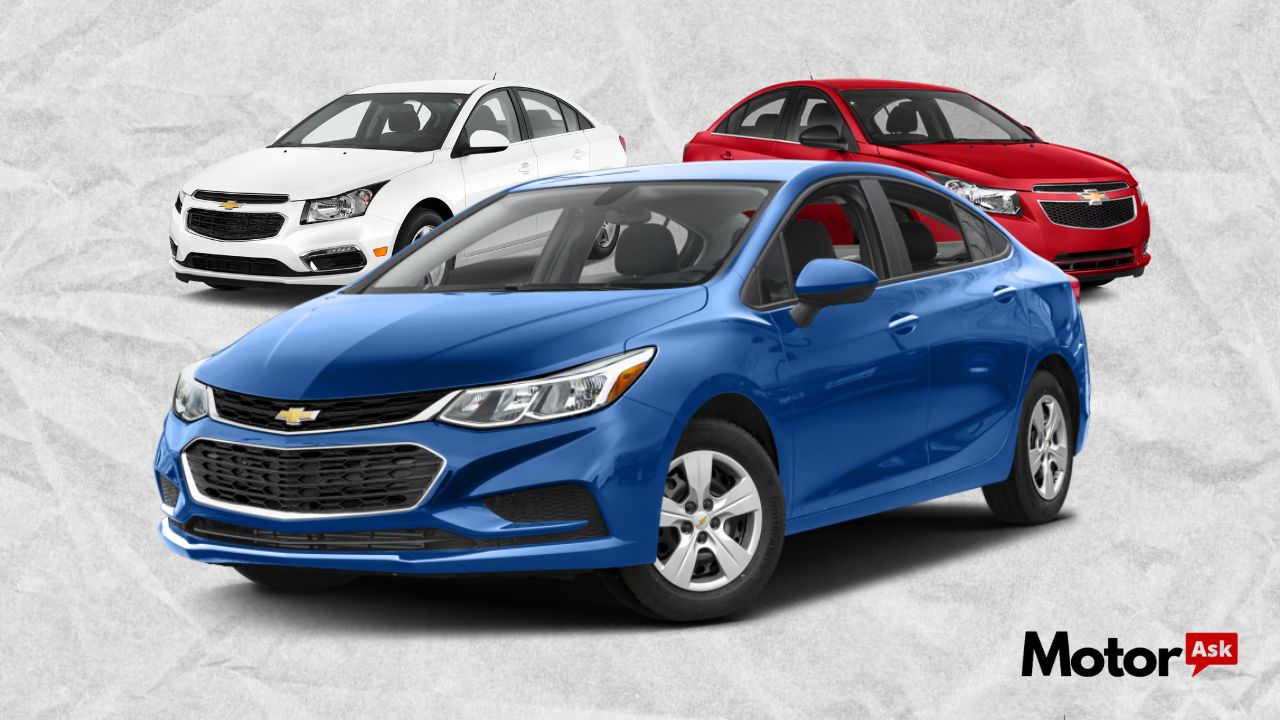 The Chevrolet Cruze offered a fun drive, as well as safety and versatility to its drivers, and it quickly became a fan favorite.

Unfortunately, Chevy discontinued the production of the Cruze in 2019.

If you loved the Cruze and are wondering what car you can purchase that Is similar, then you’ve come to the right place.

In this article, we have detailed a list of cars that are very similar to the Chevy Cruze.

If the logos were removed from the Chevy Cruze and Honda Civic it would be difficult to tell the cars apart. Both the exterior shape of the car and interior size are almost identical in size.

According to Repairpal, both the Cruze and the Accord have favorable reliability ratings.

What the Honda Civic shares with the Chevy Cruze are high levels of technology and design features.

As is with the Chevy Cruze, so is the cargo room important for Honda Civic shoppers.

Their owners often use these vehicles to haul families on vacation and weekend getaways.

Another commonality between Cruze and Honda Civic is the great fuel economy.

Drivers can travel without the worry of spending a lot of money on fuel.

Rated to deliver almost 38 mpg on the highway, the Honda Civic Diesel is great for road trips.

The Elantra has a slightly more modern look to it than the Cruze. The Cruze has the standard midsize car appearance.

The Elantra has improved in reliability ratings over the years with the most recent model getting a 4.5/5 rating from Repairpal compared to the 4.0 for the Cruze.

Similar to the Chevy Cruze, the Hyundai Elantra feels much bigger than it is.

Each provides a degree of refinement inside, ample seating, and cargo space.

In general, the Elantra has many similarities in features and functionality to the Chevy Cruze. These include:

The 2019 Chevy Cruze and the 2019 Toyota Corolla are both very efficient cars.

At the entry-level, they get identical city MPG.

Like the Cruze, Toyota Corolla is designed to seat five people and is available as either a hatchback or sedan.

The driver assistance system and emergency telematics that exist in a Cruze are also available in the Toyota Corolla, depending on the trim level.

When it comes to the engine, both feature 4-cylinder engines capable of similar fuel economy at the base trim level.

You also have a choice between a compact sedan or a hatchback design.

Both car models feature a 4-cylinder engine with similar horsepower that is paired with a manual transmission.

However, as you climb the trim level ladder, you have an option for an automatic transmission, just like the case with the Cruze.

Each of these vehicles is equipped with sophisticated features that help you enjoy your trip.

A 4-speaker sound system that can deliver audio entertainment is at your disposal.

As is with the Cruze, the Ford Focus comes with a dashboard-mounted display screen, making access to your features fast and convenient.

The 2020 Mazda3 is closer in quality as well as in appearance to the Chevy Cruze.

They both have a forward-lurching look that oozes an upscale and sophisticated look. Both of these models offer two styles of bodies.

One is a 4-door sedan style with a trunk separated from the cabin, and the other is a 5-door hatchback style.

Both 2018 models of the Cruze and Mazda3 are desirable commuter vehicles ideal if you are looking for a roomy, fuel-efficient, and fast car.

The Mazda3 shares modern looks with the Chevy Cruze and can navigate harsh weather elements such as winter and heavy rainstorms.

Like the Cruze, the Mazda3 is highly rated regarding purchasing cost, fuel economy, safety, maintenance costs, and style.

The Nissan Sentra offers a lot of similarities to the Chevy Cruze. The Sentra sits higher than the

Cruze, and has a sporty trim compared to the standard trim of the Cruze.

The Sentra has a smaller footprint compared to the Cruze which makes it easier to park.

Despite the smaller footprint, it has more head and legroom for drivers.

The Cruze provides slightly more room for exterior passengers and has a more modern interior design than the Sentra.

If you want to stay in the Chevrolet family the Chevy Trax is a great option.

The Cruze does the edge in horsepower as it offers a 153 horsepower four-cylinder motor compared to the 138 HP engine that comes with the Trax.

The Trax and Cruze both have 4.0 reliability ratings from Repairpal so you can count on similar performance from both vehicles.

If you are looking for a car that is most similar to the Cruze, we recommend the Honda Civic as it is probably the most similar.

The Honda Civic will give you the same feel and look as the Cruze but will provide you with upgrades in reliability, and savings in average annual repair cost.

The Civic has an average annual repair cost of $368, while the Chevy Cruze averages around $545.

While you may pay a little more for the Civic, we are confident that you will be happy with the choice in the long run as many Civics can last over 300,000 miles with proper maintenance!