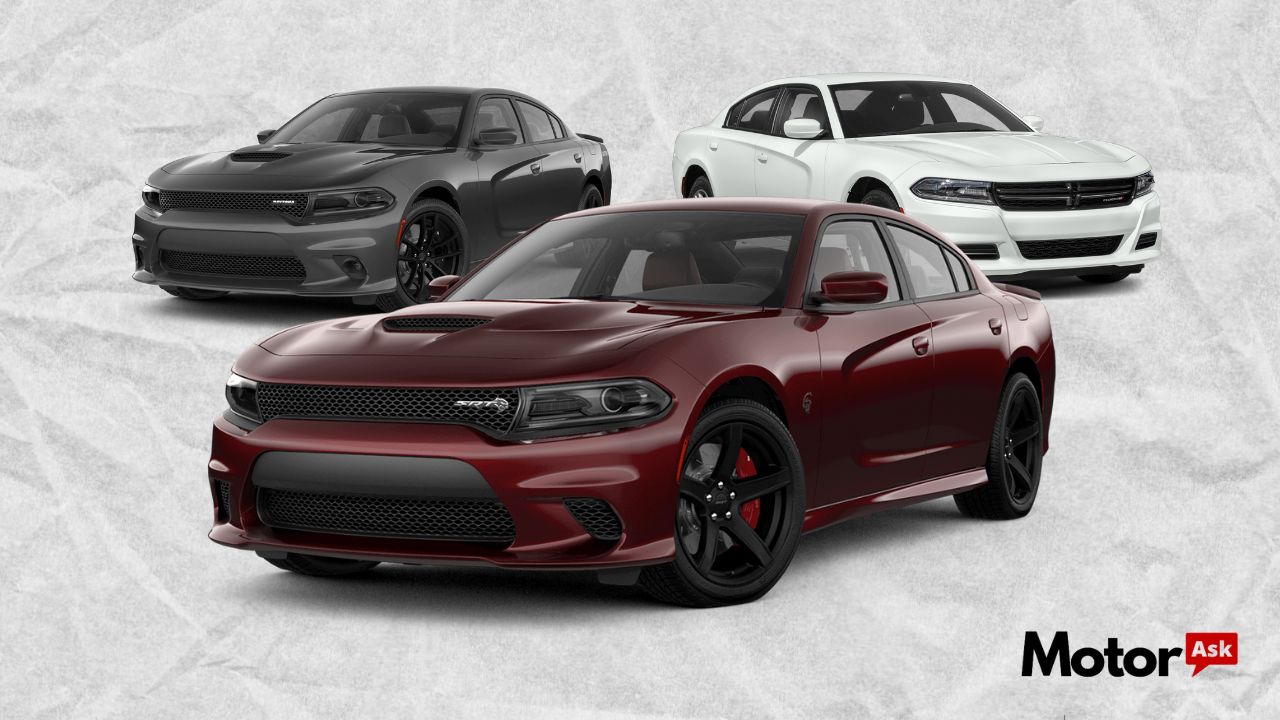 The Dodge Charger has evolved remarkably since its introduction in 1966. But all its versions, including the current one, have retained core qualities like a stylish and aerodynamic body and a generally luxurious feel.

Seven generations down the line, the Dodge Charger is still going strong in the market. Perhaps you’re a fan of this one-time coupe and present-day four-door sedan but would like to explore similar options on the market. If that’s the case, we have you covered.

Delve into this list to ﬁnd similar alternatives to the Dodge Charger and why you might want to consider them.

Like the Dodge Charger, the Chrysler 300 is a leading member of the large sedan class. Both cars run on the same platform and are similar in size but sport slightly different outward appearances. While the 198.6-inch long Chrysler features a classy look, the 198.4-inch long Dodger assumes a more muscular form.

The Chrysler 300 packs a powerful 292 horsepower V6 cylinder engine paired with an 8-speed automatic transmission like the Charger, but it offers just a slightly lower performance in terms of power and speed.

Maneuvering the Chrysler is as smooth as handling the Dodge Charger as they both have a similar turning radius and Rear Wheel Drive feature.

As per gas mileage, the Chrysler slightly edges the Charger with its more efﬁcient fuel usage, which is between 18 – 19 miles per gallon in the city and 27 – 30 MPG on the highway.

And while both vehicles offer very similar head and legroom in the front seats, the Chrysler provides a little more space at the back. That said, both cars can seat the same number of passengers, which is ﬁve.

Regarding convenience, you’ll ﬁnd similar tech features in both cars, including a backup camera, cruise control, keyless entry and start, steering wheel controls, etc. But the Chrysler has standard features that are only optional in the Dodge Charger, such as an MP3 Player, satellite radio, Wiﬁ Hotspot, climate control, and air conditioner.

If you’re looking for a knock-out sports car that doesn’t veer too far away from what the Dodge Charger offers, then the Camaro has your name on it.

Available in coupe and convertible options, the two-door Camaro is a pacy pony car thanks to its turbocharged 275-horsepower 2.0 liter, four-cylinder engine that’s just behind the Charger’s 292-hp V6 powerhouse.

The Camaro has similar fuel economy ﬁgures with the Charger’s 19MPG/30MPG/23MPG with mileage ﬁgures pegged at 19 MPG in the city, 29 on the highway, and 22 combined.

With responsive steering and handling features similar to the Charger’s, including a rear-wheel drivetrain, the Camaro lets you own the road without the fear of losing control.

All 188.3 inches of the Camaro can ﬁt four people. That’s just one less than the Charger’s capacity. And although the room in the Camaro’s rear seats is signiﬁcantly smaller than the Charger, your passengers should still be comfortable.

While the Camaro offers slightly fewer soft-touch areas in its interior than the Charger, it comes with similar standard infotainment ﬁttings, including a touchscreen, six speakers, Android and Apple CarPlay.

The Stinger is an elegant midsize hatchback sedan and an excellent alternative to the Charger.

The four-door sedan runs on a turbocharged 2.0-liter four-cylinder engine merged with an 8-speed automatic transmission that thumps out 255 horsepower, a couple of levels below the Charger’s 292-hp engine.

Interestingly, despite having a slightly lower-powered engine, the Stinger jumps from zero to 60mph in 4.9 to 5.7 seconds, while the Charger achieves the same result in 6.4 seconds.

Standing at 190.2 inches in length, the Stinger is a ﬁve-seater like the Charger but with more comfy rear seats.

With fuel economy ratings such as 22 MPG in the city and 25 MPG combined, the Stinger trumps the Charger’s 19 MPG (city) and 23 MPG (combined) but slightly fall behind the Charger’s 30MPG on the highway with 29MPG.

As far as vehicle interiors go, you’ll be getting just as much value for your money with the Stinger as you would with the Dodge Charger. The Stinger’s interior is stylish and kitted with leather upholstery, a level above the Charger’s cloth-wrapped seats.

It also packs other features for your convenience, including heated front seats, dual-zone automatic climate control, a blind-spot monitor (absent in the Charger), an auto-dimming rearview mirror, a 7-inch touchscreen, and a six-speaker audio system, Apple CarPlay, and Android Auto, etc.

The storied Ford Mustang is a worthy alternative to the Dodge Charger, and that’s not just because of its heritage.

Like the Dodge Charger, the Ford Mustang is a nifty muscle car but comes as a two-door coupe with a convertible option, unlike the Charger that’s a sedan.

Although the slightly more compact 188.3-inch long Mustang is a four-seater and is more cramped at the back, it offers similar leg and headroom in the front seats to the ﬁve-seater Charger.

The Mustang packs impressive ﬁrepower under its hood. The pacey vehicle is powered by a 2.3-liter turbocharged four-cylinder engine paired with a 6-speed manual transmission delivering a whopping 310 hp and 350 lb-ft of torque which is superior to the Charger’s 292-hp and 260 lb-ft of torque engine.

Both the Mustang and the Dodger are rear-wheel-drive cars and share some other features including, 17-inch wheels, keyless entry and ignition, and a touchscreen display. But the Mustang includes some standard features not available in the Dodger’s basic trim, such as blind-spot monitoring, forward collision mitigation, and lane-keeping assist.

The Challenger is a 197.9-inch, retro-style, two-door muscle coupe, and like the Dodge Charger, it seats ﬁve people. But the Charger offers more legroom in the rear seats at 40.1 inches than the Challenger’s 33.1 inches.

For a vehicle within its price range, the Challenger boasts an impressive engine. Its powerhouse is a 3.6-liter V6 engine mated with an eight-speed automatic transmission that reels out 305 horsepower and 268 lb-ft of torque, which is slightly above the Charger’s 292 hp/260 lb-foot engine.

Fuel economy for both vehicles stands at the same ﬁgures: 19MPG/30MPG/23MPG (city/highway/combined), and they both include an 18.5-gallon fuel tank. Both cars also operate on a rear-wheel-drivetrain for easy handling.

The Avalon sedan was Toyota’s ticket into the sedan space, and they made the car good enough to compete with options like the Dodge Charger.

Like the Charger, the Avalon is a four-door sedan with enough seating space for ﬁve passengers and offers roughly the same head and legroom as the Charger in the front and rear seats.

The Avalon also packs an engine that’s just as impressive as the Charger’s own. Beneath the Toyota’s hood is a 301-horsepower, 267 lb-ft of torque, 3.5-liter V6 cylinder engine paired with an eight-speed automatic transmission similar to the Charger’s.

Both vehicles also fall in the same fuel economy class, with Avalon having a slight edge with 22MPG/city, 32MPG/highway, and 26MPG/combined. But the Charger takes the fuel tank size crown as its 18.5-gallon storage capacity beats the Avalon’s 14.5-gallon tank.

The Avalon comes with a few standard tech features available in the Charger, such as Apple CarPlay and Android Auto, Dual-zone climate control, and a touchscreen. But the Toyota sedan goes on to offer extra luxury components not available in the standard Charger including, leather upholstery, an impressive 8-speaker stereo, and safety features such as adaptive cruise control, collision mitigation, and lane departure alert, and a blind-spot monitor.

The Genesis G80 vies ﬁercely for a spot among luxury sedans, and though it’s less muscular than the Dodge Charger, it comes close in almost every other aspect.

The 196.5-inch long midsize G80 is a four-door vehicle and a ﬁve-seater like the Charger but offers a little less front shoulder room, rear legroom, and shoulder room.

Like the Dodge Charger, the G80 runs on a powerful engine with impressive specs, including its turbocharged 2.5-liter quality and 300 horsepower, and 311 lb-ft of torque-producing ability. Not to mention that both vehicles’ engines are paired with the same eight-speed automatic transmission.

Also running on a rear-wheel-drive platform, the G80 offers steering ease similar to the Charger, but the latter delivers more deft and stable handling.

And on the tech end, the G80 comes with standard infotainment features like a touchscreen, an impressive 12-speaker radio, Apple CarPlay, Android Auto, dual-zone climate control, and more. The sedan also packs an impressive lineup of safety features, including adaptive cruise control, automatic braking, blind-spot monitoring, lane-keep assisting, and others.

The Nissan Maxima is another decent alternative to the Dodge Charger worth considering.

The Maxima is a ﬁve-seater like the Charger and is classiﬁed as a midsize sedan but offers slightly smaller passenger and cargo space.

Blitzing your way through a trail as you would in the Dodger is also guaranteed by Maxima’s 3.5-liter V6 engine churning out an impressive 300-horsepower and 261 lb-ft of torque.

The Maxima’s engine is paired with continuously variable transmission and operates on a front-wheel drivetrain which delivers super-sporty handling.

As per fuel economy ratings, the Maxima falls in the Charger’s range with 20MPG/city, 30MPG/highway, and 24MPG/combined. The same goes for Maxima’s fuel tank capacity pegged at 18 gallons, that’s .5 less than the Charger’s tank.

Although the Lincoln MKZ is a more modest substitute for the Charger in terms of sportiness, it has upsides similar to what the Charger offers.

For one, the luxury Lincoln sedan can seat up to ﬁve people, just like the Charger.

It’s also powered by a fairly decent turbocharged 2.0-liter, four-cylinder engine that thumps out 245 horsepower and 275 lb-ft of torque. The engine is mated to a six-speed automatic transmission.

Fuel economy is one of the areas where the Lincoln catches the eye. It not only falls within the Charger’s MPG range but surpasses it with its impressive 42MPG/city, 39MPG/highway, and 41MPG combined. Its fuel tank capacity is also right up there, with the Chargers at 18 gallons.

Shared tech features between the Charger and the Lincoln include a touchscreen display, Apple CarPlay, Android Auto, and a stereo system (11 speakers in the Lincoln). But the Lincoln throws in additional amenities to sweeten the deal, such as its front collision warning, lane-keep assist, blind-spot monitoring, and an emergency braking system.

The LaCrosse also joins the Lincoln as a modest alternative to the Charger, especially in the power and handling sections.

That said, the more traditional and elegant LaCrosse rivals the Charger in passenger space, as it’s also a ﬁve-seater and roomy at that.

Running on a standard 2.5-liter, four-cylinder engine, the Buick LaCrosse churns out 194 horsepower and 187 lb-ft of torque. This setup is joined by an electric motor and a six-speed automatic transmission. While this falls below the Charger’s impressive standard ﬁrepower, the Buick offers more engine power on higher trims.

The Gas mileage sector is another area where the Buick squares up to the Charger with 20MPG/city, 30MPG/highway, and 24MPG/combined. That’s one more than the Charger’s city and combined mileage (highway mileage is the same for both cars). Also, the Buick’s 15.8-gallon tank isn’t far behind the Charger’s 18.5-gallon capacity.

Like the Charger, the Buick has basic infotainment features, including an 8-inch display screen, Apple CarPlay, Android Auto, a sound system (eight speakers in the Buick), keyless entry, and ignition and auto climate control. However, you’ll ﬁnd more amenities and driver assistance components in the Buick, such as a 4G LTE hotspot, a rearview camera, and rear parking sensors.

Your interest in the Dodge Charger is understandable. After all, who wouldn’t want a stylish muscle car reminiscent of the past but kitted with decent modern tech and luxury amenities, beastly on the road and spacious enough to haul ﬁve passengers comfortably? But if, for some reason, you want to try out another brand with a similar vehicle, don’t hesitate to snap up one of the ones listed above.