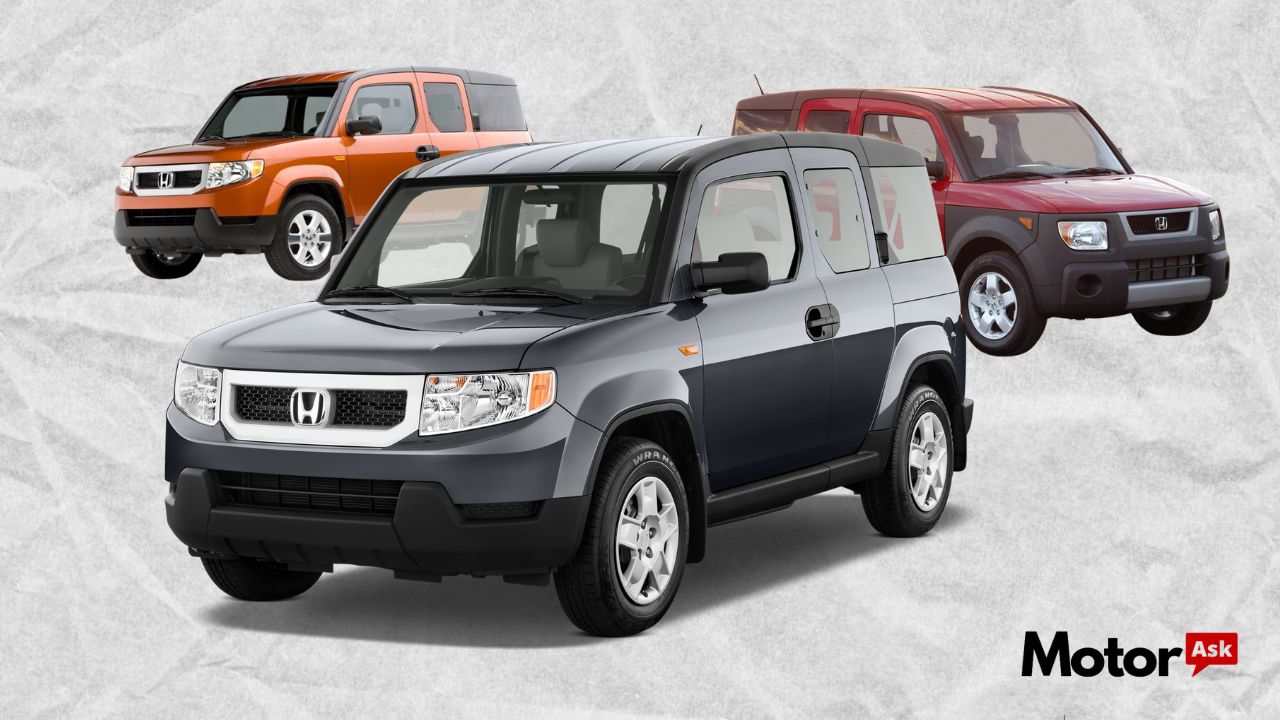 The Honda Element was launched in 2003 and built up a loyal following thanks to its spacious interior, tank-like safety, and excellent reliability.

Unfortunately, Honda ended the production of this distinctive SUV back in 2011.

If you fell in love with the Element and are wondering what similar car to purchase, we’ve got you covered.

Both the Honda Element and the Ford Bronco Sport share a boxy outlook, except the Bronco is a little boxier.

You can choose from a three or four-cylinder turbocharged engine, with the latter producing 250 HP and 277-pound feet of torque.

The fuel economy of this new model is close to the EPA estimate of around 26 combined mpg, not far from the Element’s 24 mpg highway rating.

Much like the Element, the Bronco’s boxy interior offers generous headroom as well as plenty of cargo space – 32.5 cubic feet behind the rear seats and about 65 cubic feet when you have them down.

The Land Rover Defender has a boxy, Jeep-ish body style that is similar to the Element.

Like the Element, it features a high roof, and large cargo space, along with a flat roof that can be used to carry bulky luggage easily.

The Defender offers a stable ride off-road and has a powerful engine to take you pretty much wherever you want to go.

The options are a 296 horsepower turbocharged standard engine and the 396 HP turbo-six.

The four-door Defender offers a decent 78 cubic feet of space when you fold down the rear seats, which isn’t far from the Element’s 74.6 cubic feet behind the front row.

You can comfortably seat five people in the two-door defender, or optionally six by including a jump seat in the front row.

The Jeep Renegade is a subcompact SUV built for off-roading with the Trailhawk trim featuring even greater off-road performance.

The Renegade’s engine choices guarantee a high towing capacity of 2,000 lbs, and enough power for rock crawling, something you’d also expect with the Honda Element which can tow up to 1,500 lbs.

Like the Element, you’ve got the option of a 2.4-liter four-cylinder engine which in this case produces 180 horsepower.

Just like the Element, the Renegade allows passengers to enjoy plenty of headroom.

What’s more, you get about18.5 cubic feet of cargo space behind the rear seats, which you could still fold down to get a whopping 50.8 cubic feet.

If you’re into boxy cars, you can also go for the Jeep Gladiator.

However, this time you’ll have a more powerful machine with an open cargo bed, a remarkable feat that distinguishes it from something like the Wrangler.

Just like the Element, you can seat four adults comfortably in the cabin.

And in terms of cargo space, you have enough in the open cargo bed to haul your bike, motorcycle, or supplies for DIY projects.

The Gladiator is an impressive towing beast, with its 3.6-liter V6 engine offering enough power to tow your boat.

If you opt for the 3-liter turbo diesel engine, you get 250 horsepower and 442-pound feet of torque.

With pricing starting at 24,795, this is an incredibly affordable vehicle much like the Element whose cheapest trim costs $20,825.

The 2021 Subaru Forester provides an elegant blend of boxy and curvy designs.

It’s also a compact crossover SUV and has a four-cylinder engine that produces 182 horsepower and is an all-wheel drive just like the Element. And yes, you can go offroad.

Just like in the Element, you have enough cargo space thanks to the 31.1 cubic feet behind the rear seats.

If you want to stuff additional equipment like a bike, simply fold down the rear seats and you have about 76 cubic feet.

The boxy Volkswagen Golf is a compact passenger car that provides a hatchback option with four doors along with the luxury of a sedan.

Both the VW Golf and the Honda Element are practical, spacious cars that offer more cargo room than the typical compact car.

The Golf also offers precise handling and if you choose the GTI trim, you have a sporty version with even greater performance.

With its classic flat top that rivals the Element’s, you get enough headroom on top of the readily available legroom.

You also get a reasonable amount of cargo room behind the rear seat, something around 22.8 cubic feet.

Simply fold the seats down and you’ve got a whopping 52.7 cubic feet of space.

The Lincoln Navigator is similar to the Element in terms of the boxy layout; a spacious, versatile cabin, and easy cargo loading capabilities.

Its turbocharged 3.5-liter V6 engine can comfortably produce up to 450 horsepower.

And like the Element, it also has an all-wheel drive.

While you’re almost always certain of a smooth ride, the Navigator can become a handful in tight spaces thanks to its enormous size.

Because they aren’t purpose-built for outdoor enthusiasts, both the Element and the Ford Navigator have limited off-roading capabilities.

With its sheer size and tall, flat roofline, the Navigator’s seven riders enjoy a truly spacious interior with ample leg and headroom.

When both are folded, you can get a whopping 120.2 cubic feet.

The KIA Soul is a subcompact car that can be described as a subtle blend of an SUV and a station wagon.

Although it’s slightly larger, it bears a striking resemblance to the Honda Element.

The Kia Soul is rated as a highly reliable and incredibly affordable car much like the Element.

Other similarities between the two cars include the power rack and pinion steering and ABS braking systems.

The interior boasts extra room both at the front and the rear aside from the intuitive infotainment system.

When it comes to cargo room, the Soul features 24.2 cubic feet behind the rear seats and 62.1 cubic feet when they’re folded down.

Of all the Element-like vehicles, the Hyundai Palisade is a three-row crossover SUV with a boxier exterior than its counterparts.

It’s packed with a 291 horsepower V6 engine to give you a well-balanced ride and precise handling features.

The Palisade accommodates up to eight riders with a cabin spacious enough so that there’s plenty of headroom and legroom.

This is one of the Element’s greatest alternatives, featuring a versatile roomy cabin, stellar reliability, and safety.

The Honda CRV is propelled by a 184 horsepower, 2.4-liter four-cylinder base engine which is

quite similar to the Element’s 166 HP, 2.4-liter, four-cylinder engine.

Both cars are spacious with the CR-V offering 39.2 cubic feet behind the rear seats and 75.8 cubic feet when folded.

According to RepairPal, both cars have below-average maintenance costs. The annual repair cost for the CR-V is $407 which isn’t too far from the Element’s $491 annual maintenance cost.

It’s also packed with a cavernous cargo hold and a low floor with powerlifting for a seamless hands-free experience.

To wrap up things up, here is a quick summary of the vehicles that I feel offer the best alternative to the discontinued Honda Element.

Do you agree with our list? Which car do you like the best? Please let us know in the comments.