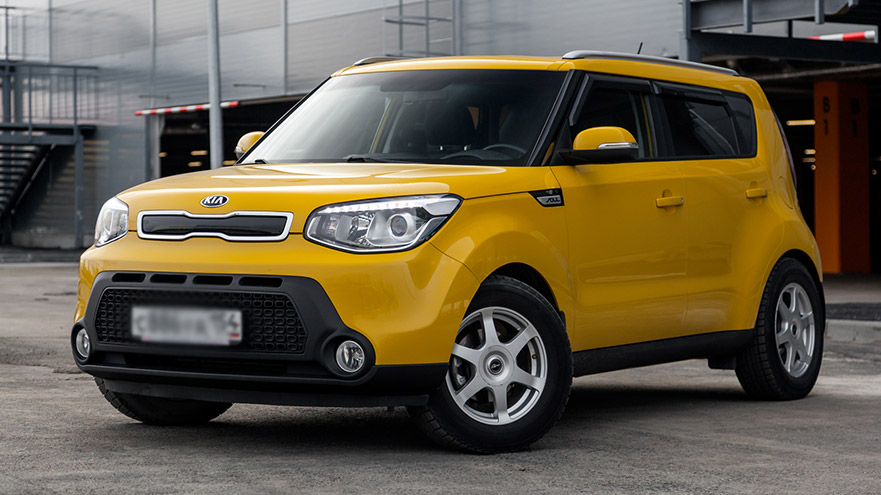 The KIA Soul stands out in the compact  SUV category with its unique boxy shape, impressive affordability, and roomy cabin.

If you love the KIA Soul but would like to know if there are other cars you should consider, you’ve come to the right place.

In this article, we’ll look at the 10 most similar cars to the KIA Soul. We’ll tell you why they are similar, as well as where they differ.

Like the Soul, the KIA Sportage has its own eye-catching design and packs even more impressive features for its price.

While both vehicles have a four-cylinder engine paired with a six-speed transmission, the Sportage’s is a 2.4-liter engine delivering more output – 181 hp and 175 lb-ft of torque – than the Soul’s 147 hp and 132 lb-ft of torque.

Both KIAs run on a front-wheel drive system.

The Sportage is also a ﬁve seater but offers more cargo space at 30.7 cu ft with all the seats in place and a slightly lower maximum at 60.1 cu ft compared to the Soul’s 62.1 cu ft.

Both SUVs have similar J.D. Power reliability scores. The Sportage gets a rating of 88/100 while the Soul has a score of 89. Both fall within the “best” category.

As far as Infotainment features go, both vehicles only share display touchscreens and Smartphone integration. The Sportage also offers more safety aids, albeit at a price that’s about $7,000 more than what the Soul costs.

With its nimble handling and sporty feel, the Honda Fit is a worthy alternative to the Soul.

Engine specs for both vehicles aren’t too different, with the Fit sporting a 1.5-liter four-cylinder engine merged with a six-speed manual transmission belting out a modest 130 hp and 114 lb-ft of torque.

And both cars have front-wheel drive.

With a J.D. Power reliability score of 82/100, the Honda Fit is one vehicle you can trust.

Fuel economy puts the Fit ahead with its 33MPG/city, 40MPG/highway, and 36MPG/combined.

Although both vehicles start at about $17,000, the Honda Fit includes fewer infotainment features than the Soul.

“Value for money” is the Hyundai Venue’s middle name.

Sporting a classy build of its own, the Venue accommodates as many passengers as the Soul but offers less cargo space at 18.7 cu ft and 31.9 cu ft.

Both vehicles run on a front-wheel drive platform and have similar fuel efﬁciency ratings.

What the Venue may lack in power and cargo space, it makes up with its superior roster of basic infotainment and safety features, including Apple CarPlay and Android Auto, automatic braking system, and lane-keeping assist.

And all these come at a marginally lower price than the Soul’s valuation, although with a J.D. Power reliability rating of 78/100, the Hyundai Venue is considered to be only moderately reliable.

Like the KIA Soul, the Hyundai Kona’s fun personality goes beyond its looks and affects its driving experience.

The two cars also share similar 2.0-liter four-cylinder engines producing 147 hp and 132 lb-ft of torque. But the Kona’s six-speed transmission is automatic instead of the Soul’s manual drive.

There’s not much separating the Kona’s gas mileage of 27MPG/city, 33MPG/highway and 30MPG combined from the Soul’s 29MPG/35MPG/31MPG. In terms of reliability, both vehicles are also almost on par as the Kona’s J.D. score of 82/100 is also considered great.

With a broader infotainment stock and safety features unavailable in the Soul’s basic trim, there can be no complaints about the Kona’s slightly higher price starting at about $21,000.

If you’re bent on sticking to the Soul’s square-shaped body, then the Jeep Renegade is worth a look.

Plus, it offers an equally impressive driving experience and even better off-road capabilities than the Soul.

The sport utility SUV runs on a powerful 2.4-liter four-cylinder engine whose 180-hp and 175 lb-ft of torque beats the Soul’s modest powerhouse.

Both vehicles are similarly spacious and offer comfortable sitting for ﬁve. But the Renegade’s cargo volume is pegged at 50.8 cu ft, which is behind the Soul’s maximum of 62.1 cu ft.

For all its quality, one area that sees the Renegade post inferior numbers compared to the Soul is with its relatively low fuel economy ratings of  21MPG/city, 29MPG/highway, and 24MPG/combined.

On reliability, the Renegade comes in at average according to J.D. Power rating standards even though it gets 82/100.

A lot separates the two SUVs in terms of infotainment specs and driver assistance features, with the Renegade coming out on top in these sections, although for a higher starting price of around $22,850.

The Seltos is as attractive as the Soul but sports more rugged features that equip it for light off-road duties like the Renegade.

Powered by a 2.0-liter four-cylinder engine like the Soul, the Seltos belts out 146 hp and 132 lb-ft of torque, making its power slightly lower than the Soul’s 147 hp. The Seltos’ setup is joined by a continuously variable transmission and, like the Soul, front-wheel drive for better traction.

The Seltos has a few infotainment features not found in the Soul, although the former costs more beginning at $21,990, and is considered to be fairly reliable according to its J.D. Power reliability score of 78/100.

The Nissan Kicks is another SUV that delivers most of what is available in the Soul and even more at a similar price point.

With almost the same dimensions, both vehicles can accommodate ﬁve passengers comfortably, but the Nissan’s maximum cargo capacity of 32.3 cu ft is considerably lower than the Soul’s 62.1 cu ft.

However, the Nissan wins the fuel economy tussle with its 31 MPG/city, 36 MPG/highway, and 33 MPG/combined ratings. But it loses the reliability battle against the Soul with its J.D. Power rating of 68/100.

Both share interior features like cloth upholstery and air conditioning, but the Nissan completely blows the Soul of the water in the driver aid section, where it boasts amenities not available in the Soul such as forward collision mitigation, blind-spot warning, lane departure warning, and more.

While not an SUV, the hatchback KIA Rio has some structural and technical semblance to the Soul, making it worth considering as an alternative to the latter, even more so due to its marginally lower starting price of $16,990.

Its 1.6-liter four-cylinder engine paired with a continuously variable transmission isn’t far off the Soul’s engine in terms of output. The Rio runs on 120 hp and 112 lb-ft of torque, while the Soul can muster only 147 hp and 132 lb-ft.

Both vehicles are front-wheel drive, so they offer a similar driving experience.

The Rio Hatchback boasts more driver support and infotainment features than the Soul and has a similarly great J.D. Power reliability score of 87/100.

Although the xB was discontinued in 2015, there aren’t many cars with such a striking outward resemblance to the Soul.

Not much separates the vehicles in passenger space as both cars can accommodate ﬁve. But the Scion xB’s maximum cargo capacity of 70 cu ft beats the Soul’s 62.8 cu ft.

The xB also comes in with a decent engine boasting a 2.4-liter displacement, four cylinders, and producing 158 hp and 162 lb-ft, more than the Soul’s output.

The xB has a far more robust lineup of driver assistance amenities than the Soul, including a standard rearview camera, traction control, stability control, and more, at a slightly lower starting price.

Also, the xB is generally considered to be very reliable, giving it and the Soul one more shared feature.

The only area where the xB doesn’t give the Soul a run for its money is in the fuel economy sector, where it delivers 22 MPG/city, 28 MPG/highway, and 24 MPG/combined.

The Hatchback design adds style to the ever-reliable Corolla without forgoing practicality, just like the KIA Soul.

The Corolla is powered by a four-cylinder 168 hp and 151 lb-ft of torque engine, meaning it promises more zip on the road than the Soul. But like in the Soul, the Corolla’s engine also sends power to the front wheels.

On the fuel economy front, the Corolla leads with 32 MPG/city, 41 MPG/highway, and 35 MPG/combined.

But what the Corolla doesn’t have in cargo space, it makes up for in safety features. The car boasts Toyota Safety Sense 2.0, which includes forward collision mitigation, lane-keeping assist, and adaptive cruise control albeit at a slightly steeper starting price of about $20,000.

The good news is the Corolla is also considered to be very trustworthy and should serve you for years.