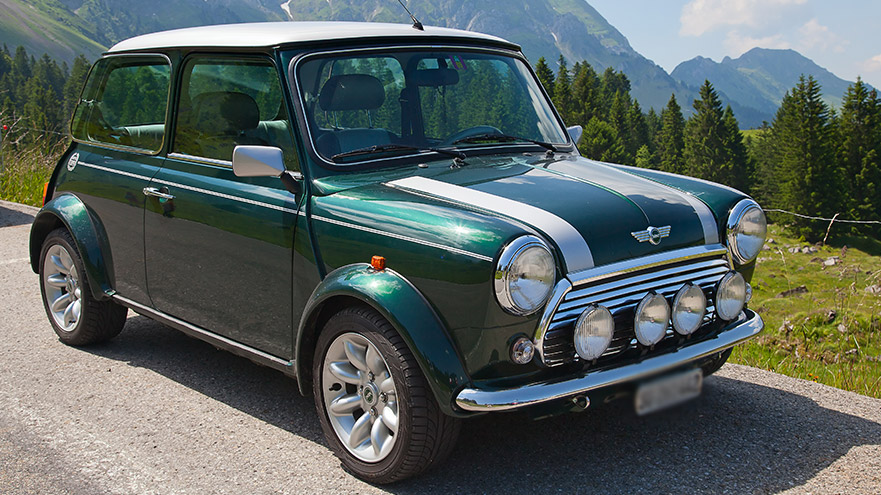 The Mini Cooper is an iconic subcompact car that’s fun to drive, nimble, and uniquely stylish both inside and out.

However, there are some excellent alternatives to the Mini Cooper if it doesn’t quite match what you’re looking for.

In this article, we’ll show you 10 cars that are similar to the Mini Cooper and worthy of your consideration.

Like the Cooper, the Corolla comes with a front-wheel drive system, but its engine is more powerful. It’s a 2.0-liter, four-cylinder setup delivering 168 hp and 151 lb-ft of torque.

The Carolla’s outstanding fuel economy ratings of 32MPG/city, 41MPG/highway, and 35MPG/combined are better than the Coopers.

Passenger capacity is similar in both cars, but the Corolla wins the cargo space jostle when the seats are up but loses the maximum cargo capacity battle with 23 cu ft compared to the Cooper’s 34 cu ft.

The Corolla starts at a slightly lower price than the Cooper but has more driver aids than its MINI rival.

If you’re looking for a vehicle almost 100% identical to the Cooper, then the Suzuki Swift is your best bet.

Featuring the compact, boxy shape of the Cooper, the Swift can seat four, but you can squeeze in a ﬁfth passenger.

The vehicle runs on a 1.2-liter Dualjet engine paired with a continuously Variable Transmission offering just 83 hp and 79 lb-ft of torque.

Interestingly, the Swift delivers incredible fuel efﬁciency that surpasses even the Cooper’s. You’re looking at as much as 52.8MPG from the Swift.

Cargo space in the Swift comes in at 9.4 cu ft with the seats up and 20.5 cu ft when they are down, making the Swift’s maximum cargo capacity less than the Cooper’s 34 cu ft.

The Swift is a budget-friendly alternative to the Cooper as its price is less than half of the Cooper’s.

The VW Beetle is also a classic that has enjoyed a modern makeover like the Cooper.

Sporting a turbocharged 2.0-liter four-cylinder engine, the Beetle pumps out 174 hp and 184 lb-ft of torque, that’s more than the Cooper’s 134 hp. However, both run on a front-wheel drive system.

Although a four-seater like the Cooper, the Beetle offers its rear-seat passengers more convenience due to its greater legroom and shoulder room.

Both vehicles’ fuel economy ratings are close, with the Beetle clocking 26MPG/city, 33MPG/highway, and 29MPG/combined.

Even though Infotainment features in the Beetle are more comprehensive, including Android Auto, absent in the Cooper, the Beetle comes at a slightly lower price.

The Fiat is as compact a car as you’d get.

Even smaller in length than the Cooper, the Fiat 500 is listed as a four-seater but is best suited for two adults as the backseats could get uncomfortable, especially during long trips.

Surprisingly, the Fiat offers more cargo space (9.5 cu ft) than the Cooper when the rear seats are up. But its maximum cargo capacity of 30.1 cu ft trails the Cooper’s 34 cu ft.

Engine performance places the Fiat slightly just ahead of the Cooper. The Fiat sports a 1.4-liter turbocharged powerhouse merged with a ﬁve-speed manual transmission, delivering 135 hp and driving the front wheels like the Cooper.

The Fiat edges the Cooper’s city fuel economy rating, the Cooper takes the highway medal while both have the exact combined ﬁgures.

Although both vehicles share some tech features, the cheaper Fiat lacks smartphone integration.

The Golf is a slightly bigger alternative to the Cooper, but its size only matters in terms of its ﬁve-passenger capacity.

When it comes to cargo capacity, the Golf delivers 17.4 cu ft with all the seats up and, surprisingly, just 25 cu ft with the rear seats down. That’s less than the Cooper’s max of 34 cu ft.

The Golf does slightly better in the power department with its 1.4-liter four-cylinder turbo engine paired with a six-speed manual transmission and churns out 147 hp and 184 lb-ft of torque. But both cars come with all-wheel drive.

The Gold’s fuel efﬁciency is also better at 29MPG/city, 39MPG/highway, and 33MPG/combined. With its slew of infotainment features and driver aids, the Golf is well worth its slightly higher price.

The Veloster comes with a cute and practical asymmetrical three-door system that allows easier access to the rear seats than regular two-door cars like the Cooper.

The bigger four-seater is also more accommodating than the Cooper. It also beats the Cooper in cargo space with its 19.9 cu ft capacity with all seats in place and 44.5 cu ft max capacity.

Its 2.0 four-cylinder engine pumps out 147 hp and 132 lb-ft of torque, more than the Cooper’s. It also runs on a front-wheel drive platform.

Fuel economy for both vehicles falls within the same range, with the Veloster clocking 27MPG/city, 34MPG/highway, and 30MPG/combined.

And even with superior driver assistance features, the Veloster goes for a considerably lower price.

The Civic offers a nice blend of everything the Cooper offers and goes above and beyond.

The cute Honda boasts a more powerful 1.5-liter engine producing 174 hp and 162 lb-ft of torque and sending power to the front wheels like in the Cooper.

With a bigger yet compact frame, the 177-inch long and 70.8-inch wide Civics offers more room to its ﬁve passengers.

Fuel economy puts the Civic ahead with its impressive 31MPG/city, 40MPG/highway, and 34MPG/combined.

If you want what looks almost exactly like the Cooper but has more space, then the MINI Clubman will do.

The Clubman is a hatchback wagon that comfortably seats ﬁve and boasts a more spacious cargo area (17.5 cu ft, max: 47.9 cu ft) than the Cooper delivers.

The Cooper’s engine pales compared to the Clubman’s boisterous 2.0-liter four-cylinder engine paired with a six-speed manual transmission and producing 189 hp and 207 lb-ft of torque.

A front-wheel drive system powers both vehicles. But fuel mileage puts the Clubman just behind the Cooper.

The Clubman includes some driver aids absent in the Cooper but comes at a steeper price.

With an explosive 2.5-liter four-cylinder engine ﬁring off 186 hp and 186 lb-ft of torque and its delightfully sharp handling, the Mazda 3 can thrill you better than the Cooper.

The 175.6-inch long and 70.7-inch wide Mazda is bigger than the Cooper, this offering more stretching room for passengers and more cargo space – 20.1 cu ft with the seats up.

You’ll also be getting almost the same miles per gallon with the Mazda 3 as the Cooper offers.

In terms of interior features, infotainment, and tech amenities, the more sophisticated Mazda blows the Cooper out of the water even though they both start at similar price points.

There you have it; clearly, you don’t need a Cooper to enjoy the perks of driving one.

Although shaped like a compact SUV, The Countryman retains the standard Cooper’s cute shape and fun handling and is also pricier.

Powering the Countryman is a 1.5-liter, three-cylinder engine producing 134 hp and 162 lb-ft of torque, sending power to the front wheels. That’s exactly like the Cooper’s output and almost like its setup.

The standard Countryman seats ﬁve people while the Cooper accommodates four to ﬁve.

Cargo capacity places the Countryman ahead of the Cooper. The former offers 17.6 cu-ft with all seats in place and 47.6 cu-ft with the rear seats down. Those ﬁgures are 8.7 cu-ft and 34 cu-ft in the Cooper.

Both vehicles include similar driving aids and infotainment systems with a 6.5-inch touchscreen, Bluetooth, and a six-speaker stereo setup.