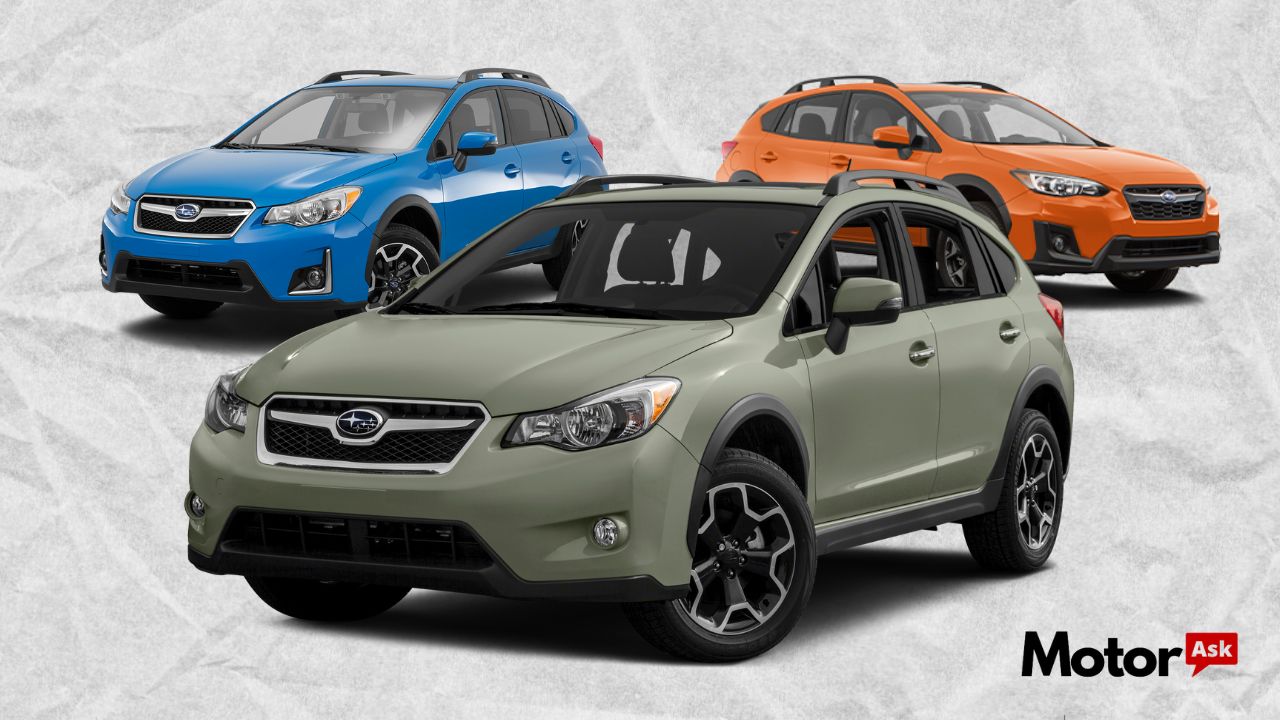 From its impressive passenger and cargo space to its slew of tech features, all-wheel drivetrain, and rugged exterior, the Subaru Crosstrek offers a good balance of practicality and luxury at a very reasonable price.

That said, there are some excellent alternatives to the Crosstrek if it doesn’t quite match your requirements.

In this article, we’ll show you 10 cars that are similar to the Subaru Crosstrek and well worth your consideration.

The Subaru Forester is the Crossttrek’s roomier, less sporty-looking cousin.

If you value comfort over sleek looks, then the Forester is definitely the better option.

The ﬁve-seater Forester has a much roomier cabin than the Crosstrek, with more cargo space, more headroom, and seats that include lumbar support.

Powered by a superior 2.5-liter four-cylinder engine, the Forester delivers 182 hp and 176 lb-ft of torque, more than the Crosstrek’s 152hp and 145 lb-ft of torque.

Like the Crosstrek, the Forester comes standard with all-wheel drive and has enough ground clearance to handle light off-road duties.

Being the smaller and more aerodynamic car, the Forester can’t compete when it comes to fuel economy. The Crosstreks base model also costs several thousand dollars less than the Forester.

The Toyota RAV4 is another compact SUV that buyers often cross-shop when thinking about the Crosstrek.

With its 203hp 2.5-liter engine merged with an eight-speed transmission, the RAV4 gives you more ﬁrepower than the Crosstrek.

The RAV4, like the Crosstrek, seats ﬁve and has a passenger volume of 98.9 cu-ft, which is almost equal to the Crosstrek’s 100.9.

But you’ll be looking at far more impressive cargo space in the RAV4 with its 37.6 cu-ft behind the second row and 69.8 cu-ft with the back seats folded.

The RAV4 also beats the Crosstrek when it comes to Fuel efﬁciency, but the fuel savings are offset by the RAV4s significantly higher price tag.

Looking at car forums while researching this article, it’s clear that people appreciate the long-term reliability of the RAV4, with several owners experiencing issues with the Crosstrek just after the warranty had expired.

The Mazda CX-30 rivals the Subaru in every area and edges it by offering a more elegant exterior styling and more responsive and deft maneuvering.

The Mazda and the Crosstrek are ﬁve-seaters with similar passenger and cargo capacities.

Engine-wise, the Mazda beats the Crosstrek with a superior 2.5-liter 186 hp and 186 lb-ft of torque engine paired with a 6-speed transmission. In comparison, the Crosstrek packs a 2.0-liter box engine that delivers only 152 hp.

Both vehicles offer similar gas mileage, but the Mazda comes out on top with 25MPG/city, 33MPG/highway, and 28MPG/combined, while the Crosstrek’s base model delivers 22MPG/29MPG/25MPG.

You’ll ﬁnd similar standard tech features in both SUVs, but the Mazda has more driver assistance and safety amenities. Luckily, both vehicles start at the same $22,000 price range.

Reintroduced in 2021 after a 12-year absence, the trailblazer brings light off-road capabilities similar to the Crosstrek.

Although a ﬁve-seater like the Crosstrek, the Trailblazer’s more compact shape means its overall in-vehicle room is a little smaller, but it edges the Crosstrek’s 20.8 cubic feet cargo volume with its 25.3 cubic feet capacity.

Kitted with a turbocharged 1.2-liter three-cylinder engine, a continuously variable transmission, and front-wheel drive, the Trailblazer, thumps out 137 hp and 162 lb-ft of torque. That’s not exactly on the Crosstrek’s level, but you can upgrade to a more robust setup that includes all-wheel drive like the Crosstrek.

At 28MPG/city, 31MPG/highway, and 29MPG combined, the Trailblazer trumps the Crosstrek’s gas mileage in the city (22MPG) on the highway (29MPG) and 25MPG combined.

Both compact SUVs share basic infotainment features like a four-speaker stereo and a display touchscreen, but the Trailblazer throws in more advanced safety features in its most basic trim.

With agile handling and the promise of a fun driving experience, the Hyundai Kona is worth your attention, especially since it has a similar price point to the Crosstrek.

The Hyundai’s passenger capacity is also ﬁve, but the slightly roomier Crosstrek has more leg and headroom in the front and rear seats. Also, the Hyundai’s 45.8 cubic feet cargo space trails the Crosstrek’s 55.3 cubic feet.

Similar 2.0-liter four-cylinder engines power both vehicles, only that the Kona’s is paired with a six-speed automatic transmission and delivers less horsepower (147) and torque (132 lb-ft) compared to the Crosstrek’s 152hp and 145 lb-ft output.

Gas mileage for both SUVs is in the same range, but you’ll be getting more miles per gallon with the Kona’s 27MPG/city, 33MPG/highway, and 30MPG/combined.

With smartphone integration, a touchscreen display, and a six-speaker stereo system, the Kona boasts similar interior features as the Crosstrek but more standard driving aids.

The HR-V is powered by a 1.8-liter four-cylinder engine paired with a continuously variable automatic transmission and delivers a slightly lower output to the Crosstrek at 141 hp with 127 lb-ft of torque.

And like the Crosstrek, the HR-V runs on an all-wheel drive platform.

While the HR-V is also a ﬁve-seater, it slightly lags behind the Crosstrek in passenger volume (100.9 square feet compared to 96.1 square feet) making for less head and legroom in its front seats. That said, the HR-V has more cargo space at 55.9 cubic feet.

As per fuel economy, the HR-V delivers a superior 26MPG/city, 31MPG/highway, and 28MPG/combined.

Both vehicles’ tech and infotainment features and price range place them on roughly the same pedestal.

The Subaru Outback offers something different as a cross between an SUV and a wagon yet packs most of what you’ll get from the Crosstrek.

Like the Crosstrek, the Outback boasts above-average off-road capabilities with its decent ground clearance and all-wheel drive.

Powering your way through an adventure is easier with the Outback’s 2.5-liter four-cylinder engine delivering 182 hp and 176 lb-ft of torque.

As far as tech features go, you’ll ﬁnd similarities between the Crosstrek and Outback, including smartphone integration, but the Outback boasts more driver aids, although at a higher price.

If you’re looking for an option that gets as close as possible to the Crosstrek, then the Impreza is your best bet, particularly its hatchback version.

The Impreza shares body shape interior and exterior dimensions with the Crosstrek, offering enough space for ﬁve passengers too.

Both vehicles also have the same cargo capacities which stand at 20.8 cu-ft with the rear seats upright and 55.3 cu-ft when the back seats are folded.

Unsurprisingly, the Impreza and Crosstrek also run in the same engines and drivetrain (all-wheel drive).

Both vehicles have almost the same fuel economy ratings, but the Impreza offers just 30MPG on the highway compared to the Crosstrek’s 29MPG.

Even though both vehicles pack similar tech features, the Impreza is slightly cheaper.

While the CX-5 is eye-catching even from a distance due to its ﬁnely sculpted body, it offers more than good looks.

Fuel economy ratings also give the CX-5 an edge over the Crosstrek. The Mazda delivers 25MPG/city, 31MPG/highway, and 28MPG/combined.

Although the CX-5’s standard drive train is front-wheel drive, there’s room to upgrade to an all-wheel drive system as you have in the Crosstrek.

The CX-5 also comes with a comprehensive list of driver aids like the Crosstrek’s CVT version but is just a tad more expensive.

The CR-V’s appeal is in its impressive rating across the board, much like the Crosstrek.

Beneath the hood of this Subaru Crosstrek equivalent is a turbocharged 1.5-liter four-cylinder engine mated to a continuously variable transmission producing 190 hp and 179 lb-ft of torque, superior numbers to the Crosstrek’s output.

With 27MPG/city, 32MPG/highway, and 29MPG/combined, the CR-V beats the Crosstrek in fuel efﬁciency, but has all-wheel drive only as an available upgrade, unlike in the Crosstrek, where it’s standard feature.

While both vehicles are ﬁve-seaters, the slightly bigger CR-V offers more space for rear-seat passengers. It also holds a larger cargo capacity at 39.2 cu-ft with the rear seats upright and 75.8 cu-ft with the back seats folded.

Both vehicles have similar tech features, but the more expensive CR-V doesn’t include smartphone integration in its base trim, unlike the Crosstrek.

In summary, the cars we feel are most comparable to the Subaru Crosstrek are:

Please let us know in the comments!