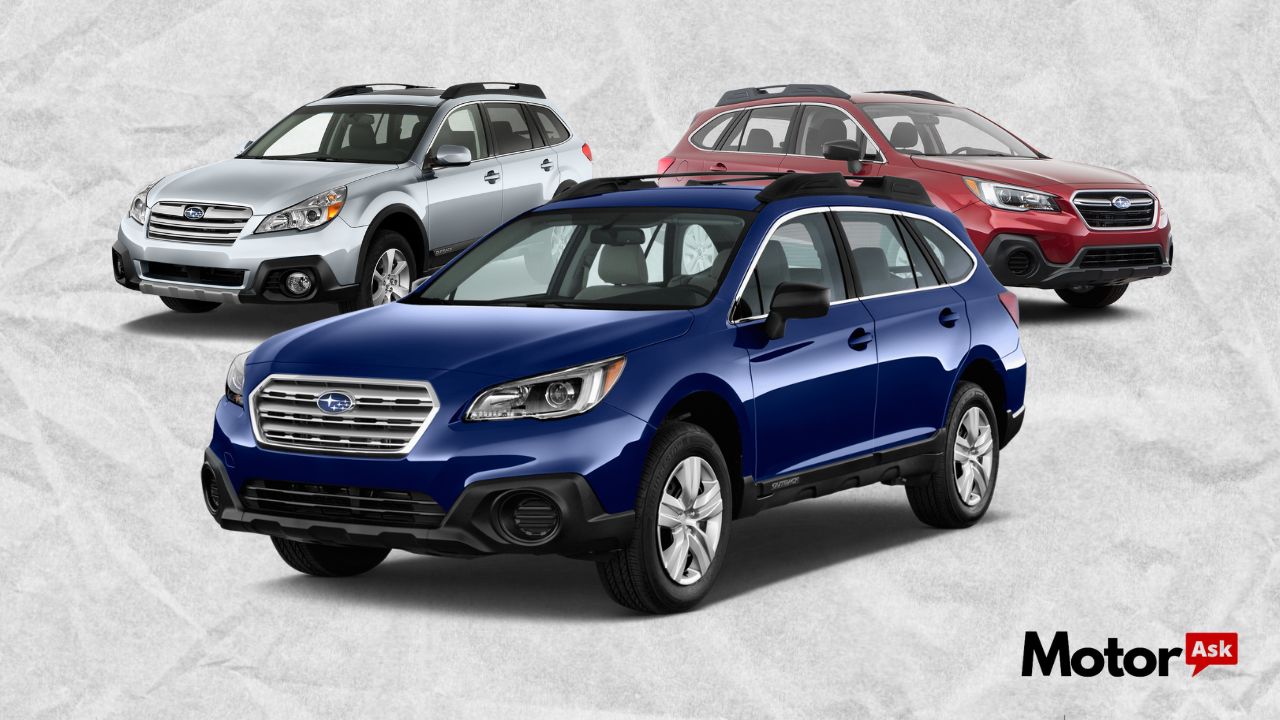 The Subaru Outback offers a comfortable ride, generous cargo space, and excellent safety features. It’s a good option for people who like the beneﬁts an SUV offers, without abandoning the feeling of driving a car.

If you’ve been looking at the Outback but are wondering what cars are comparable to it, you’re in luck!

In this article, we’ll show you 10 cars that are similar to the Subaru Outback and well worth your consideration.

Since the Forester and Outback belong to the Subaru family, they share several features, even though the latter is more of a compact SUV.

The Forester, like the Outback, is powered by a 2.5-liter 182-hp and 176 lb-ft of torque engine paired with a continuously variable automatic transmission.

Both vehicles also run on the same all-wheel-drive system for excellent traction and handling.

While both are ﬁve-seaters, Forester’s 107.8 cu-ft passenger volume is a little less than the Outback’s 109 cu-ft.

The fuel economy ratings for both Subarus are the same, and their interior features and driver aids are similar, but the Forester is slightly less expensive.

Both the Crosstrek and Outback have well-powered engines, although the former’s 2.0-liter four-cylinder engine delivers 152hp compared to the Outback’s 182hp engine.

The slight disparity in engine specs aside, both vehicles come with standard all-wheel drive.

While the Crosstrek’s 22MPG/city, 29MPG/highway, and 25MPG combined fuel ratings aren’t exactly on par with the Outback’s, they come very close.

Subaru’s trademark driver assistance suite comes standard with the Outback but is only available on Crosstrek trims with an automatic transmission. The Outback also edges the Crosstrek price-wise.

Chevy’s Equinox is not only slightly better looking than the Outback; it also rivals it in other departments, too.

The Equinox comes with a 1.5-liter four-cylinder engine that pumps out 170 hp and 203 lb-ft of torque, that’s just a little lower than the Outback’s horsepower.

Equally a ﬁve-passenger vehicle, the Equinox offers 100 cu-ft of people space and a maximum cargo capacity of 63.9 cu-ft, ﬁgures that just fall behind the Outback’s capacity.

The Equinox’s standard front-wheel drive trim has fuel economy ratings of 26MPG/city, 31MPG/highway, and 28MPG/combined, right in the same range as the Outback’s 26MPG/33MPG/29MPG.

Both vehicles give you similar infotainment, convenience, and driver assistance features, although the Equinox includes extras like a 4G LTE hotspot and comes at a lower price.

The eight-seater Ascent is a bigger vehicle than the Outback and offers an upgrade on most of the perks of its Subaru counterpart.

Besides more passenger room, you also get more maximum cargo space of 86.5 cu-ft in the Ascent, but this number drops to 17.8 with all the seats upright.

You’ll ﬁnd a more powerful engine under the Ascent’s hood with specs like a 2.4-liter displacement, four cylinders, and an output of 260 hp and 277 lb-ft of torque.

Like the Outback, the Ascent has a continuously variable transmission and runs on an all-wheel-drive system.

While the Ascent’s 21MPG/city 27MPG/highway and 23MPG combined fall short of the Outback’s fuel economy prowess, it matches its Subaru colleague in the tech features and driver aids sections. The Ascent would set you back more dollars, though.

The RAV4 gives the Outback a run for its money with its impressive rounded quality. Decked with a 2.5-liter 203 hp engine, the RAV4 delivers more power than the Outback.

While the equally ﬁve-occupant RAV4 has less passenger volume of 98.9 cu-ft than the Outback’s 109, the former offers more cargo space with the rear seats up – 37.6 cu-ft to the Outback’s 32.5 cu-ft.

However, the Outback edges it in maximum cargo capacity, delivering 75.7 cu-ft compared to the RAV4’s 69.8.

Fuel efﬁciency puts the RAV4 on a marginally higher pedestal with 27MPG/city, 34MPG/highway, and 30MPG/combined.

Both vehicles come with standard infotainment features and driver aids, including forward-collision mitigation and lane-keeping assist, and cost roughly the same amount.

Whatever the Outback offers, the Honda Passport goes above and beyond its delivery.

Both vehicles feature basic features like smartphone integration, touchscreen display, and driver aids, but the Honda includes more tech amenities, although for a higher price.

Fuel efﬁciency is one of the few sections where the Passport falls behind the Outback. The Honda clocks 20MPG/city, 25MPG/highway, and 22MPG/combined.

The CX-5 gives you more than its stylish exterior to look forward to.

While also sporting a 2.5-liter four-cylinder engine like the Outback, the CX-5’s powerhouse delivers more output at 186 hp and 187 lb-ft of torque.

Gas mileage for both vehicles falls within the same range, with the CX-5 delivering 25MPG/city, 31MPG/highway, and 28MPG/combined.

At a marginally lower price, the CX-5 offers similar convenience and driver assistance amenities as the Outback.

The Highlander makes up for its steep price compared to the Outback by delivering value all-round.

With enough seating capacity for eight people, the three-row Highlander boasts a passenger volume of 141.3 cu-ft. And although the Highlander’s cargo volume behind the third row is 16 cu-ft, its maximum capacity stands at 84.3 cu-ft.

The Highlander runs on a powerful 3.5-liter V6 engine paired with an eight-speed automatic transmission churning out 295 hp and 263 lb-ft, way more than the Outback’s 182 hp and 176 lb-ft output.

You’ll get more miles per gallon from the Outback, but the Highlander doesn’t do badly with 21MPG/city, 29MPG/highway, and 24MPG/combined.

With an optional all-wheel-drive upgrade from a front-wheel drive, similar infotainment features to the Outback, and a few amenities not available in the Subaru like the tri-zone auto climate control, the Highlander does more than hold its own beside the Outback.

The Escape mixes everything appealing in the Outback, from a stylish exterior to decent off-road capabilities.

Powered by a 1.5-liter three-cylinder engine pumping out 181 hp and 190lb-ft of torque, the Escape gets you almost the same results on the road as the Outback.

The Escape’s starting price is a little lower than the Outback’s, and seeing as both vehicles also pack similar infotainment and driver assistance features, that’s excellent news.

Only a few vehicles can compete with the Outback at a lower price, but the CR-V does just that.

With a 1.5-liter four-cylinder engine and a continuously variable transmission sending power to the front wheels, the Honda delivers 190 hp and 179 lb-ft of torque – better than the Outback’s output.

Fuel economy standings for both vehicles are almost exact, and the CR-V also includes a slew of driver aids and convenience features matching the Outbacks.