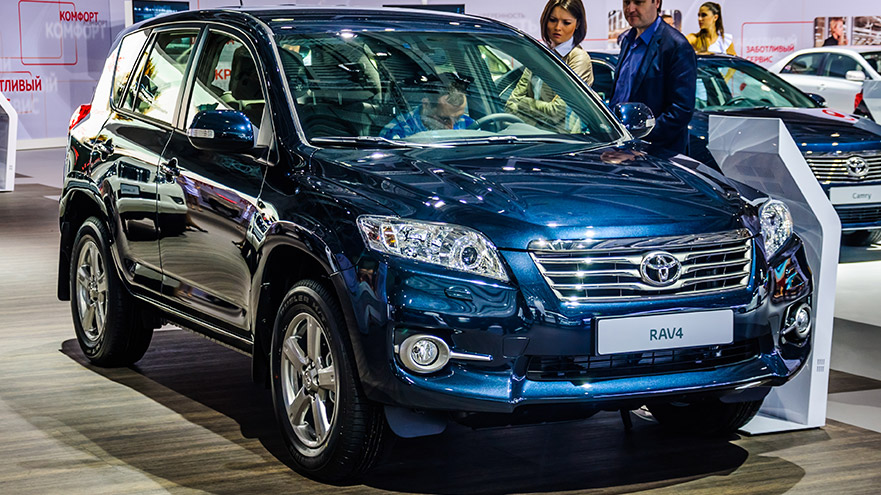 The Toyota Rav4 is currently the undisputed king of the compact SUV class thanks to its excellent reliability, low maintenance cost, and good gas mileage.

If you’re considering buying a RAV4 but are looking for alternatives to consider, you’ve come to the right place.

In this article, we’ll look at 12 popular cars that are similar to the Toyota Rav4.

The Subaru Forester has a lot of similarities with the Toyota Rav4. Both are small crossover SUVs with an ample interior, seating capacity of five people, and an impressive list of standard tech features. The two vehicles also come with a powerful four-cylinder engine, automatic transmission, and an all-wheel-drive system, which gives you that extra grip when driving on wet or rough terrains.

Although both are pretty good on gas, the ever-popular Rav4 outshines its rival in this regard. It’s also the better option if you are big on cargo space, speed, and towing power. But the Subaru Forester has a roomier interior and a lower starting price.

The crazily expensive Toyota Highlander is another excellent alternative to the Rav4. Like the Toyota Rav4, it is also a car-based SUV with a spacious interior, huge cargo hold, and plenty of popular advanced tech features. Both vehicles boast a four-cylinder engine, automatic transmission, and similar drivetrain options: four-wheel-drive and all-wheel-drive.

The main differences are in their size and seating capacity. While the RAV4 is a compact, five-seater crossover, the Highlander is a midsize vehicle that can seat up to eight passengers. The Highlander also has bigger cargo space, more engine power, and higher towing capacity. On the other hand, the Toyota Rav4 consumes less fuel and costs less than its SUV rival.

The Honda CR-V is one of the closest competitors of the Toyota Rav4 in the compact SUV segment. Both are small crossovers with ample interior space, comfortable seating for five passengers, and many of the latest technology features.

The two vehicles also offer a four-pot engine, CVT automatic transmission, and an optional all-wheel-drive system, which guarantees excellent traction and control off-road. Plus, they have nearly the same fuel economy and are similarly priced, although used RAV4s are considerably more expensive.

However, the Honda SUV holds several advantages over the Toyota Rav4. It has quicker acceleration, more luggage space, and higher reliability ratings than its rival. But the Rav4 boasts better handling and comes with more tech features out of the box.

Although smaller in size, the Toyota Corolla Cross has a lot of things in common with the perennial best-seller, the Rav4. It is also a compact SUV with a spacious interior, seating capacity of five passengers, and an impressive suite of comfort and safety tech features.

Like the Rav4, this vehicle also has a four-cylinder powertrain, CVT automatic transmission, and an optional all-wheel drive. Also, both SUVs have a maximum towing capacity of 1500 pounds, allowing you to carry all the necessary gear for your family adventures.

But the Corolla Cross is more frugal, easier to maneuver, and less expensive than its older sibling. However, the Toyota Rav4 wins when it comes to speed, engine power, and cargo space.

The Subaru Outback also makes an excellent alternative to the Toyota Rav4. Both are crossover SUVs with a roomy cabin, comfortable seating for five, and a similar roster of convenience and safety features. The two vehicles come with an efficient four-cylinder engine, an automatic transmission, and an optional all-wheel drive for those looking to venture off the beaten path.

However, the Outback is the bigger of this pairing, so it offers more space for cargo and passengers. It also boasts a higher towing capacity and higher safety ratings than the Toyota Rav4. But the Toyota SUV has more engine power, better gas mileage, and a lower base price compared to the Outback.

The Toyota Venza is another SUV with similar features to the Rav4. Although it looks more stylish and luxurious, this vehicle has the same interior space, seating capacity, and innovative tech features as the Rav4. Both crossovers also come with a four-cylinder powerplant, automatic transmission, and an all-wheel-drive, which ensures better traction off the pavement.

However, the Toyota Rav4 is clearly the more practical choice, with a bigger cargo area and higher towing power than the Venza. But the Venza is quicker, more fuel-efficient, and packs more safety equipment compared to the Rav4.

The Nissan Rogue deserves a place on your list if you are looking for an alternative to the Toyota Rav4. This compact SUV has similar interior dimensions, seating capacity, and popular technology features as the Rav4. It also comes with a potent four-cylinder engine, automatic transmission, and a traction-enhancing all-wheel-drive system. Plus, not much separates the two vehicles in starting price.

However, the Toyota Rav4 outshines the Rogue when it comes to acceleration, gas mileage, and towing capacity. It also offers a better ride and handling than its close rival. But the Nissan is the go-to option if cargo space and tech features are your top priorities.

The Hyundai Tucson is a popular compact SUV comparable to the Toyota Rav4. Although the two vehicles look different on the outside, they have similar interior dimensions, seating capacity, and technology features. Both crossovers also boast a four-cylinder engine, automatic transmission, and an all-wheel-drive system as an option.

The Toyota Suv is quicker, more frugal, and offers a more polished ride compared to the Hyundai Tucson. But the Hyundai has bigger cargo space, towing capacity, and a lower base price than the Rav4.

The Mazda CX 5 is another top-selling model in the compact SUV category, and it shares many similarities with the Toyota Rav4. This vehicle offers similar interior space, seats the same number of passengers, and boasts many advanced tech features as the Rav4. It also has a four-cylinder engine under the hood, an automatic transmission, and a wheel drive system.

But the Toyota Rav4 has a better fuel economy, higher towing capacity, and bigger luggage space than the Mazda CX 5. It is also less expensive and more suitable for off-road use. On the other hand, the CX 5 has a better-quality interior and higher safety ratings than the Toyota SUV.

The Lexus NX is a sleeker alternative to the Toyota Rav4. Both are two-row crossovers with a large interior space, comfortable seating for five individuals, and several driver-aid features. The two vehicles come with a four-pot engine and automatic transmission and are available either as a four-wheel-drive or all-wheel-drive system.

Speaking of fuel efficiency, the Toyota Rav4 has the advantage. It is rated  30 mpg combined, whereas the Lexus NX has an EPA rating of 25 mpg combined. The Toyota SUV also has more room for passengers and cargo and starts at a significantly lower price compared to the Lexus NX. But the Lexus is the better choice if you want a luxury experience during trips.

The Subaru Crosstrek is an option you’ll want to consider when looking for a well-rounded SUV with similar features as the Toyota Rav. Like the Rav4, it is also a five-seater SUV with plenty of room for passengers and cargo. Both vehicles also come with an energetic four-cylinder engine, automatic transmission, all-wheel drive, and several cutting-edge tech features.

As the bigger one, the Rav4 offers a larger passenger area and cargo space than the Crosstrek. It is also more fuel-efficient, better equipped, and more reliable than the Subaru. But the Crosstrek is less expensive and more comfortable to sit in on long trips and adventures.

Although Volvo XC60 and the Toyota Rav4 may look completely different, they are similar in multiple ways. Both are two-row compact crossovers with a spacious cabin, a seating capacity of 5, and many desirable tech features. Plus, they come with a capable four-cylinder powertrain, automatic transmission, and an optional all-drive for excellent grip on less-than-ideal surfaces.

However, the Toyota Rav4 offers more cargo and passenger space than its rival. It also consumes less fuel and is less expensive to buy compared to the Volvo XC60. But the Volvo SUV moves faster and can tow heavier loads than the Rav4.