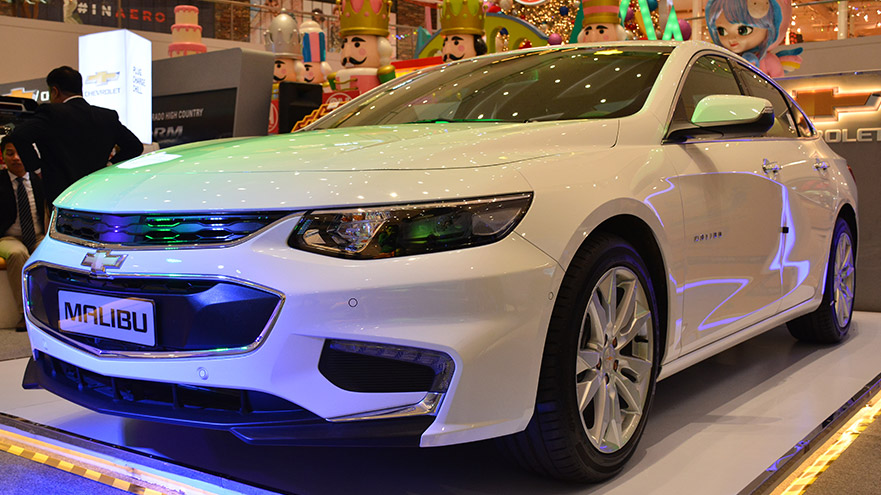 The Chevy Malibu needs no introduction. It’s popular for its eye-catching exterior, affordability, and practicality.

If you love the Malibu but you’re looking for an excellent alternative midsize car, look no further.

In this article, we show you 10 cars similar to but different from the Malibu.

The Optima’s remodeling into the Kia K5 has given it the perfect blend of looks, practicality, and comfort, which it once sorely lacked.

The K5’s pulse-raising exterior isn’t a cover for a mediocre setup. Under the hood lies a turbocharged 1.6-liter four-cylinder engine delivering 180 hp and 195 lb-ft of torque. And its 8-speed automatic transmission powers the front wheels like in the Malibu.

Space in the K5 is abundant as its interior can treat five passengers to a comfortable ride and hold sizable cargo in its 16.0 cu ft trunk.

In keeping with its overall excellence, the K5 also delivers class-leading fuel economy reflected in its 29 mpg/city, 38 mpg/highway, and 32 mpg/combined output.

Tech features are aplenty, including smartphone integration and advanced safety features such as forward collision mitigation, lane-keeping assist, and driver attention warning, which are absent in the Malibu.

J.D. Power pegs the K5’s reliability score at 79/100, which is average according to the site but not far off the Malibu’s 84% rating. Both vehicles are also close in price points, as the K5 goes for a minimum of about $23k.

The Honda Accord has always been the poster car for midsize sedans, and for good reasons too.

For one, it sports a decent 1.5-liter four-cylinder engine delivering 192 hp and 192 lb-ft of torque, which surpass the Malibu’s output. Its transmission is also a continuously variable one powering the front wheels.

You also get a comfy five-seater with expansive seating room and a cavernous 16.7 cu ft trunk in the Accord.

Unlike the Malibu, which doesn’t have standard safety features in its base trim, the Honda delivers a slew of safety tech, including frontal collision mitigation, adaptive cruise control, and lane-keeping assist.

With a J.D Power reliability score of 82/100, which falls within the same rating standard as the Malibu’s 84/100, the Honda certainly poses as an excellent substitute for the Malibu even though its $24k starting price is about $2k higher than the Chevy’s price.

Another Honda makes the list, and this time it’s the fun-to-drive, efficient, and impressively roomy Civic.

Under its hood, the Civic’s base trim packs a 2.0-liter, four-cylinder engine thumping out 158 hp and 138 lb-ft of torque. Although this is a little lower than the Malibu’s output, the Civic matches the Malibu’s continuously variable transmission delivering power to the front wheels.

As earlier mentioned, efficiency is the Civic’s forte, and this shows in its 30 mpg/city, 38 mpg/highway, and 33 mpg/combined fuel economy ratings.

The refined interior also fits five adult passengers and cargo that can fill up 15.1 cu ft of space.

The Civic also looks out for your safety with its  Honda Sensing, which includes forward collision mitigation, lane departure mitigation, and adaptive cruise control. And at 82/100, J.D. Power believes these features and more are reliable.

The icing on the cake is that the Civic’s $21k straying price is fractionally lesser than the Malibu’s valuation.

The Impala easily ranks among the best family-size sedans on the market and comfortably beats the Malibu on many fronts.

Blessed with an expansive interior that seats five, passengers are guaranteed a comfy ride in this Chevy.

You’ll also find an 18.8-cu ft-capacity trunk that rivals any other vehicle in the same class.

When you finally hit the road in this handsome ride, you’ll enjoy smooth handling and decent fuel economy pegged at 18 mpg/city, 28 mpg/highway, and 22 mpg/combined.

Throw in a J.D. Power reliability score of 82/100 (which is considered great per the platform’s rating scale) and top-notch tech features like a rearview camera, and the Impala’s $32k starting price begins to look like a steal.

Like the Malibu, the Chevy Cruze is also big on comfort and practicality.

With an interior space perfect for a family of five, the Cruze also sports a 14.8 cu ft trunk, which is not far behind the Malibu’s 15.7 cu ft cargo space.

Although both vehicles send power to their front wheels, the Cruze uses a six-speed automatic transmission compared to the Malibu’s continuously variable fitting.

Standard tech features in the Cruze are also abundant, including smartphone integration and a rearview camera. Plus, it’s just as reliable as the Malibu going by its 85/100 J.D. score.

Starting at about $17k, the Cruze will cost you less than the $22k Malibu.

Every bit of the Camry screams efficiency, as you’d expect from a Toyota product.

The midsize sedan is a spacious five-seater like the Malibu and boasts a cargo capacity of 15.1 cu ft, rivaling the Malibu’s 15.7 cu ft.

Both vehicles run on a front-wheel-drive platform but the Camry packs a more powerful four-cylinder 203 hp, 184 lb-ft of torque engine.

The Camry’s 28 mpg/city, 39 mpg/highway, and 32 mpg/combined fuel economy ratings are as impressive as the Malibu’s.

Plus, its J.D. Power reliability score of 84/100 is on par with the Malibu’s rating.

Accompanying the Camry is a slew of standard safety features not available in the Malibu, thus making the Camry’s slightly higher starting price of about $25k even more justifiable.

After an overhaul, the Altima returned with improvements that continue to turn heads.

Like the Malibu, the Altima can fit five people and boasts a 15.4-cu ft cargo space.

Operating on a front-wheel drive-enabled setup like the Malibu, the Altima gets its juice from a 2.5-liter four-cylinder engine whose 188 hp and 180 lb-ft of torque output beats the Malibu’s.

Fuel economy puts both vehicles on a similar pedestal as the Altima returns 26 mpg/city, 36 mpg/highway, and 30 mpg/combined.

But the Altima slightly edges the Malibu in terms of dependability as J.D. Power gives it 85/100.

The Altima will cost you more at $25k, but it also offers more standard driver assistance features.

The Corolla aptly mixes simplicity, safety, and comfort to deliver an experience that’s well worth its $21k starting price.

The lowest trim starts with a four-cylinder 139 hp and 126 lb-ft of torque engine, delivering power to the front wheels like the Malibu.

The Corolla’s gas mileage in the city, on the highway, and combined read 30 mpg/38 mpg/33 mpg, about the same as the Malibu.

What’s more, you get driver aids packaged as Toyota’s Safety Sense 2.0, which are absent in the Malibu. And according to J.D. Power, the Corolla is dependable enough to earn an 80/100 rating, which is considered good.

The Nissan Maxima throws in the sort of athleticism lacking in the Malibu.

Powered by a standard 3.5-liter V6 engine delivering 300 hp and 261 lb-ft of torque, the Maxima also sports outstanding handling for a midsize sedan.

This engine setup is completed by a continuously variable transmission that drives the front wheels like the Malibu. And when you hit the road, returns for each fuel gallon stand at 20 miles/city, 30 miles/Highway, and 24 miles/combined.

Like the Malibu, the Maxima has adequate seating space for five passengers and a 14.3 cu ft capacity.

And with a J.D. Power reliability rating of 93/100, which falls within the best range, you can rest assured that the Maxima will give you value for every cent of the $37,000 you’d likely splash on it.

The Fusion’s roomy five-seater interior, 16.0 cu ft cargo capacity, excellent handling, and superb ride comfort are its major strengths, but it also rivals the Malibu in other departments.

Its lowest trim runs on a 173 hp, 176 lb-ft torque engine paired with a six-speed transmission powering the front wheels.

At 23 mpg/city, 34 mpg/highway, and 27 mpg/combined, the Fusion’s fuel economy is well above average and just behind the Malibu’s.

And according to other users on J.D. Power who have given it an aggregated reliability score of 87/100, you can depend on the Fusion. Throw in its decent lineup of tech features, including the Co-Pilot360, a suite of driver aids, and the car’s $23k starting price sounds like a bargain.