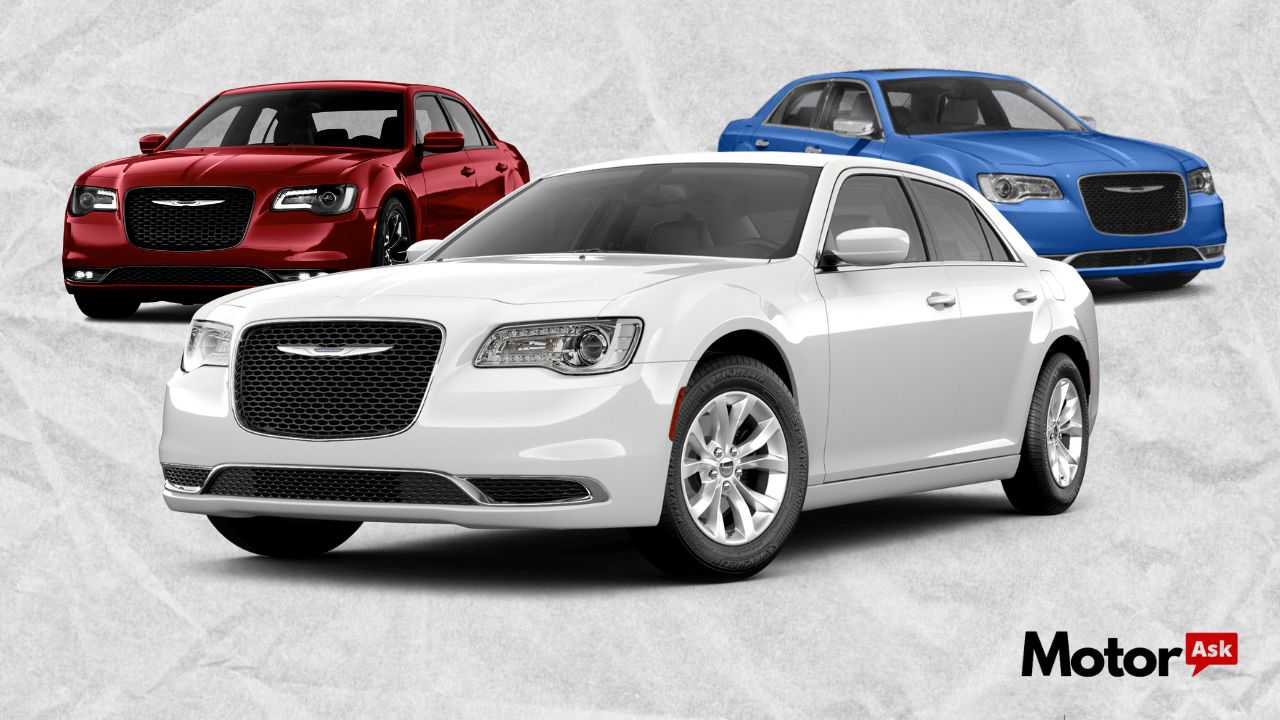 Although the 300 Chrysler series is again hitting the market in 2021, diminishing sales continue to threaten the fan-favorite sedan with extinction.

If you fell in love with the Chrysler 300 and are wondering what similar car to purchase, this article is for you.

In this comprehensive guide, we take a close look at 10 cars that are similar to the Chrysler 300.

The A3 is one of the best Chrysler 300 alternatives in the market.

Just like the Chrysler 300, the A3 is a 5 seater that comes in three body styles: a Sportback, a two-door convertible, and a four-door sedan.

However, the A3 has a better compression ratio and thus requires less fuel to achieve the same power as the 300.

The A3 also boasts a better-combined fuel consumption rate of 53.5 mpg compared to Chrysler’s 25 mpg.

However, unlike the 300, the A3 offers Autonomous Emergency Braking (AEB) in all grades giving it a slight edge.

Related Article: How Long Does A Chrysler 300 Last? (Explained)

If you loved the Chrysler 300 due to its spacious design features, then the BMW 3 Series is your alternative car.

As a sports sedan, the 330e’s interior design is much more practical and can easily fit four average-sized adults, with a smaller fifth-person fitting on the rear-center cushion.

Just like the Chrysler 300, the BMW 3 Series operates on gasoline engines and an 8-speed automatic powertrain.

BMW’s modular (B48) 2.0-liter four-cylinder engine delivers 135kW of power and 300 Nm of torque and drives the rear wheels via a ZF eight-speed automatic.

The latter is regarded as one of the best transmissions of its type in production today.

The Honda Accord features a serene cabin along with a frugal and efficient hybrid powertrain.

The Honda Accord and the Chrysler 300 have about the same turning radius, allowing equal maneuverability in and out of tight spots.

However, the Accord has a lower fuel consumption rate than the 300, making it the cheaper car to drive.

The Honda Accord has a five-star safety rating according to NHTSA which is comparable to the 300’s four-star rating.

Just like Chrysler 300, the Accord can comfortably seat up to 5 average-sized passengers.

Its seats are remarkable because of their supportive design and wide base, preventing driver fatigue even several hours into a journey.

Operating on a a1993 cc, 4 Cylinders Inline engine, and Honda accord is an excellent Chrysler 300 alternative.

Unlike the Chrysler 300, the Audi S3 doesn’t have a lot of interior space.

However, there is just enough space for a small family, especially over short distances.

Audi has manufactured models of S3 for 6 years with an average of 25.2 combined mpg.

The latest S3’s fuel efficiency is below average at 25 combined MPG which is identical to the 300’s.

What’s more, the S3 has a virtual cockpit, accessible performance, as well as elegant styling.

If you want to travel comfortably without worrying about making stops to fuel your car frequently, the S3 is a great alternative.

If logos were removed from the Hyundai Genesis and the Chrysler 300, it would be incredibly difficult to differentiate the two cars.

Simply put, the Hyundai Genesis has a nearly identical body shape to the Chrysler 300 with both cars comfortably seating up to 5 passengers.

Just like the 300, the Genesis is also quite spacious with a trunk volume of 15.3 cubic feet.

This is only slightly less than the Chrysler’s 16.3 cubic feet of cargo space.

The 2015 Chrysler and the 2015 Hyundai Genesis are separated by just 11 horsepower, 2 inches in length, and 60 pounds in curb weight.

If you’re more interested in an engaging driving experience rather than cargo space and rear legroom, the Jaguar XE is a great Chrysler alternative.

Although the Jaguar XE has a limited interior space, it still has the same seating capacity as Chrysler 300 (5).

However, both cars have 8-speed automatic transmissions.

Overall, the XE offers a smooth ride, excellent handling, along with plenty of horsepower.

Just like the Chrysler, the Lexus GS is a big car with plenty of room inside.

It can comfortably seat four passengers and the cabin contains a good-sized console bin.

Lexus GS boasts a 520-liter boot, with a sensible load height and space saver spare just under the floor.

Both the GS and Chrysler 300 offer smooth, composed, and quiet driving experiences.

The towing capacity of both cars stands at 1,000lbs and their exterior length is pretty much the same.

When it comes to safety, both cars have 4.5 safety ratings.

The GS has a highway fuel consumption of 32mpg and 22 mpg in the city.

Like the 300, the Lexus GS boasts a combined fuel economy of 23 mpg according to EPA.

With the Mercedes-Benz C-Class, you can expect fewer visits to the gas station than with the Chrysler 300, thanks to its tank size and fuel economy.

Nevertheless, both cars have the same seating capacity (5) and comparable cargo space.

The C-class Mercedes has a 12.6 cubic feet cargo of space which isn’t much smaller than the 300’s.

Just like the Chrysler 300, Benz C-Class has an auto-manual transmission with an all-wheel, rear-wheel drivetrain.

Coming in a smaller size than the 300, you won’t have to worry about parking space with the Mercedes-Benz C-Class.

But thanks to its lower torque, the Chrysler 300 doesn’t do as good a job at transmitting power to its wheels compared to the C-Class.

Boasting the same seating capacity (5) as the Chrysler 300, the Subaru Legacy is a good alternative.

Compared to the Chrysler 300, the Legacy has a better fuel consumption economy at 27 city/highway mpg.

The Subaru Legacy is propelled by a 182 horsepower engine, which is considerably lower than the 300 Cgrysler’s 260HP.

The Chrysler 300 comes with essentially the same basic warranty as the Subaru Legacy.

However, the Legacy is more suited to taller drivers due to its greater front head and legroom compared to the Chrysler 300.

The Ford Fusion Hybrid has a greater front head and legroom than the Chrysler 300 hence it’s more popular among taller drivers.

The Chrysler 300 is about the same width as the Ford Fusion Hybrid with both cars using 4-wheel ABS braking systems.

In terms of seating, you’ll be able to fit the same number of people (5) in both the Chrysler 300 and the Ford Fusion Hybrid.

Both cars are spacious with the Ford Fusion Hybrid having a cargo space of 12.0 cubic feet.

The 2020 Ford Fusion Hybrid has a combined fuel economy of 42mpg which is quite an impressive figure.