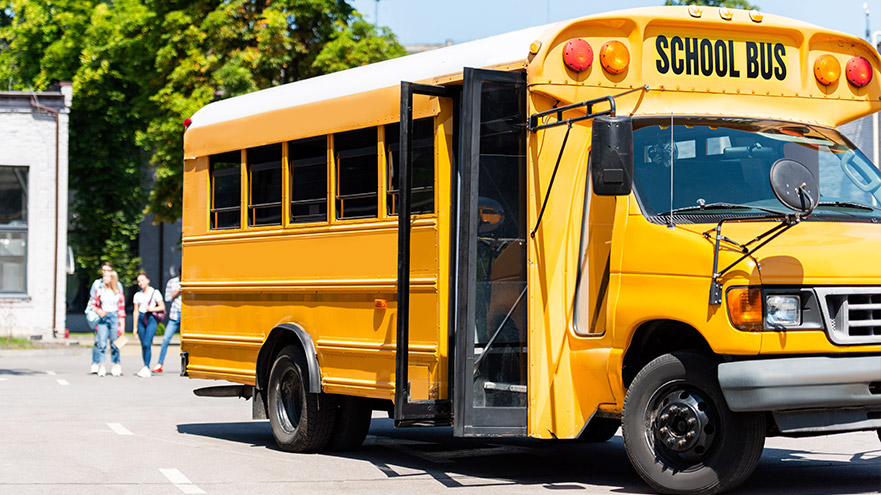 Have you been dreaming about buying a school bus to convert into a home on wheels? Then you’re probably wondering what kind of mileage these large vehicles typically get.

So, what kind of mileage does a school bus get?

On average, the gas mileage for a school bus is around 10 miles per gallon. However, contributing factors like the size of the bus, how many stops it made throughout the day, and how many occupants it usually carried can affect this number.

To give you a better idea of what you can expect from a school bus, we’ll look at their average mileage, how long they typically last, and other factors that affect their lifespan.

What Is the Average Gas Mileage of a School Bus?

Although still rather large in size, school buses average better gas mileage than that of their semi-truck counterparts.

However, this changes whenever the school bus is loaded down with occupants.

There are other factors that affect the total fuel mileage that a school bus gets that must be accounted for, as well.

For starters, the weather can play a significant role in a school bus’s mileage.

If it’s unusually windy outside, you can expect the school bus’s mileage to drop considerably.

Since most school buses run on diesel fuel, they do a much better job of preserving fuel when idling.

But you still have to take into account the frequent stopping that takes place on an average school bus route.

And when it’s loaded down with occupants, the school bus might get fewer than 6 miles per gallon.

This is because there is less weight to worry about, thus making it easier for the smaller bus to maneuver on the road.

And since there aren’t as many buses, it holds fewer occupants.

There are also rare school buses that use propane as their source of fuel.

These models have the worst fuel economy of all fuel types, averaging between 3 and 4 miles per gallon.

How Many Miles Does a School Bus Last?

This, however, is a school bus that has performed under normal driving conditions.

As discussed above, there are certain factors that can affect the performance and operation of a school bus, just like any other type of vehicle.

With that said, many school buses that you see on the road today are running on far more miles than 250,000.

Many are pushed past their typical end-of-service date for various reasons.

If there is a fleet of school buses in a school district that has suffered budget cuts, for example, it’s not uncommon to see older buses being used to shuttle students to and from school.

Most new models cost the school well over $100,000, thus making it difficult for many schools to keep their fleet stocked with newer models.

And when you consider that more than one bus is usually needed, the cost for all new buses can easily surpass half a million dollars.

This is especially true in big cities that have thousands of students.

However, the cost is usually offset by more taxpayers, thus making it easier to afford new buses when the time comes to retire older models in the fleet.

All this is to say that you should look into the bus’s service history before considering it for a mobile home or camper.

If you’re planning on doing a lot of traveling rather than staying parked in one location, it’s important to invest in a school bus that has plenty of life left in it.

Another great way to help you determine this is to look at the bus’s current mileage.

What Is High Mileage for a School Bus?

As mentioned, the 250,000 mark is usually the point at which a school bus will be retired and replaced with a newer one.

But again, this doesn’t always happen when it needs to.

Therefore, many school buses have hundreds of thousands of more miles than is generally acceptable.

Other components on a school bus will often go bad and break down, thus requiring multiple repairs over their lifetime to keep them up and running.

If a school cannot replace a bad school bus when the time is necessary to do so, the vehicle will undergo even more repairs than is generally acceptable.

If you want to convert a school bus into a mobile home or camper, you should be safe with buying one that has around 150,000 miles, as this is usually deemed “low miles” for a school bus. As such, it should still have plenty of miles left before needing significant repairs.

Which School Bus Has the Best MPG?

Most school buses that are equipped with a Cummins 5.9 or Cummins 8.3 are reported to have exceptional mileage for a vehicle in its class.

Some are capable of averaging 10 miles per gallon, while others surpass that mark.

Furthermore, if you can find a school bus with a Cummins 5.9 and an Allison 643 transmission, you’re going to be very pleased with your fuel economy.

The Cummins 5.9 on its own is famous for its fuel efficiency and thus will make an excellent buy if you’re planning to take your mobile home/camper on the road.

Following shortly behind these buses are the Detroit Diesel models, which average around 8 miles per gallon.

If you find one for a reasonable price, the slight difference in mileage might be worth it.

How Many Gallons Does a School Bus Hold?

A full-sized school bus typically holds anywhere from 80 to 100 gallons of fuel.

School buses, like other types of vehicles on the road, have different sizes of fuel tanks on them.

You can have two identical school buses, but one might have a larger capacity fuel tank.

As such, it’s important to do your research before you buy to make sure that the bus you have your eye on is equipped with a fuel tank that meets your needs.

If you’re planning on parking your bus for most of the time after converting it into a mobile home or camper, tank size isn’t going to be much of an issue.

But if you have your sights set on using your converted bus as a means of seeing the world, then you’re going to want the largest tank of best mileage possible.

The 2019 Bluebird All American is one such bus model that’s outfitted with a Cummins 8.3 and a 100-gallon fuel tank.

It’s capable of traveling around 700 miles on a single tank of fuel.

Consider how much driving you’re planning on doing throughout the week or month to better determine the size of tank you need.

From there, you can research fuel efficiency.

By weighing these factors before you buy, you’ll have a much easier time making the right call.

How Far Can a School Bus Go on One Tank Of Gas?

As we’ve already discussed, there are several factors that affect the total number of miles a school bus can travel on a single tank of fuel.

It also depends on the type of fuel used to power the school bus.

That said, the average distance for a gas-powered school bus is around 270 miles, whereas a diesel-powered model can typically travel 510 miles.

But as you just learned, the 2019 Bluebird All American is capable of reaching 700 miles before needing to refill its fuel tank.

Of course, being a newer model school bus, you’re going to spend a lot more on it.

If you’re trying to convert a bus on a tight budget and have to stick with an older model, make sure its fuel tank and mileage meet your travel needs.

How To Get Better Mileage From a School Bus?

To ensure that your converted mobile home or camper is getting the best mileage possible, check your tires regularly.

According to SchoolBusFleet, tires make the single biggest difference for speeds under 50 miles per hour.

Always ensure proper inflation of and replace any tires that are worn or damaged.

In doing so, you should see improved mileage in your travels.