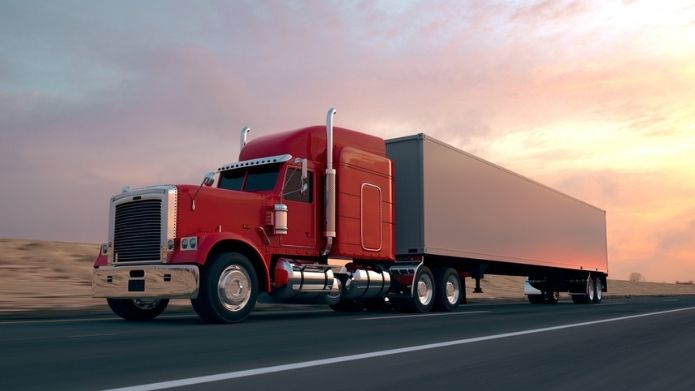 Semi trucks are massive vehicles that are typically pulling a lot of weight on the road.

As such, they don’t get anywhere near the mileage of conventional vehicles like cars, trucks, and SUVs.

So, what mileage does a semi truck get?

On average, semi trucks get around 6.5 miles a gallon. However, this number can be significantly impacted depending on the make and model and whether the semi is driving up an incline, carrying a heavier load, or driving downhill.

Continue reading to find out how you can improve your semi truck’s fuel efficiency, as well as which makes and models excel in this area (and which ones don’t).

How Many Miles Can A Semi Truck Go On One Tank Of Gas?

Most semi-trucks are capable of traveling a little over 2,000 miles on a full tank of diesel fuel.

This is assuming that the tanks on the semi are the typical 300 gallons.

What’s more, most semis that fall under this classification have an average fuel efficiency of seven miles per gallon of diesel.

Many truck companies offer their drivers solutions to assist in getting the best fuel efficiency.

In doing so, drivers can maximize their fuel stops to ensure more time on the road, thus earning more money.

That said, seasoned semi truck drivers know their vehicles inside and out.

As such, they know what kind of mileage to expect on a single tank of fuel and what steps to take to ensure the best fuel economy.

One must also take into consideration the type of load that’s being hauled and the nature of the route to get from point A to point B.

When you factor this in with the weight being transported, a semi truck’s mileage is significantly impacted.

What Is Considered High Mileage For A Semi-Truck?

Whereas the average 4-wheeler drives a total of 13,500 miles a year, that amount is nearly quadrupled for truck drivers.

With that said, some semis have been known to hit 4 million miles.

Moreover, many truckers agree that the “break-in” on trucks is somewhere around 50,000 miles, although there are some who say it’s much higher, like around 500,000 miles.

Once a diesel truck is “broken in,” it is able to get better fuel efficiency.

However, it’s around the 500,000-mile mark that many trucking companies trade in their vehicles.

This is done so that they can replace their trucks before other components start failing, which is common at such high mileage.

It’s worth noting that most semi-trucks last an average of 15+ years, although many trucking companies will trade in their trucks well before they reach that age.

How Much Gas Does a Semi Truck Use Per Mile?

This is another area that is markedly different from “4-wheelers.” Whereas cars average 25 miles per gallon, semi trucks average around 6.5 miles.

When considering the average mileage of semis, truck drivers can usually travel over 2,000 miles on a single tank of fuel.

As you can imagine, keeping semi trucks fueled up is a costly endeavor and one that needs to be carefully planned out to ensure maximum efficiency.

How Many Miles Can A Semi Truck Go On Empty?

So far, conventional cars and trucks have beaten semis in terms of fuel efficiency.

However, comparing the two vehicle types with an “empty” fuel tank is a different matter entirely.

Most 4-wheelers are capable of driving for another 30 to 60 miles once the gas tank reads “empty.”

But with semi trucks, the remaining mileage is increased exponentially.

Most semis can continue to drive for another 200 miles on an empty tank.

As such, truckers can cover more ground than cars. This is largely due to the massive size of the fuel tanks on semis.

Even though the dash says that you’re on empty, you could still have another 20 gallons left.

That said, it’s always better to play it safe, especially if you’re a new driver or in a truck that you aren’t familiar with.

Moreover, some makes and models are more accurate than others.

Cascadia Freightliners, for example, will tell you when the fuel level in the tank is at 1/8 full or even 3/16 full.

However, this isn’t the norm on all semi trucks, which is why it pays to know your truck.

Which Semi Trucks Have The Best MPG?

While there are clearly more makes and models of standard cars and trucks on the road, semis have their fair share, too.

And like those cars and trucks that semis share the road with, some get better mileage than others.

Below are a few semi trucks that get the best MPG.

Freightliner’s Evolution I ranks the highest, with an impressive 10.67 miles per gallon.

If you recall, most semi-trucks average around 6.5 miles per gallon, so the Evolution I’s numbers are nothing short of extraordinary.

Trailing shortly behind is a toss-up between International’s ProStar ES, Kenworth’s T680 Advantage, and Peterbilt’s 579 Epiq, all with 9 miles per gallon.

But remember, there are always contingencies that affect the total MPG of any vehicle, such as inclines and the total weight of the load being pulled.

Which Semi Trucks Have The Worst MPG?

Just as there are semis that get impressive mileage, there are those that falter in this category.

Freightliner’s Columbia falls short of the average 6.5 with just 5 miles per gallon.

The same is true for Volvo’s 780 Ishift.

And falling even further behind is Kenworth’s T600B with 4 miles per gallon.

In researching what current owners of these semis are saying, the consensus seems to be that they are consistently looking for ways to lighten their loads in an attempt to preserve their fuel.

If you’re a semi truck driver, you likely already try to get the best mileage possible.

Read on to learn some things you can try to improve your mileage if you aren’t trying them already.

How To Improve Mileage on Your Semi Truck

If possible, implement the following tips into your daily driving habits.

In doing so, you will likely see an improvement in your semi truck’s fuel efficiency.

As such, check your load before heading out to ensure that you aren’t carrying more than you need to be.

Most truckers want to get to their destinations as quickly as possible. And to do so, it’s common to increase speed where it’s feasible.

However, doing this really cuts into the fuel, taking the precious economy with it.

Over- or under-inflated tires affect your mileage significantly.

As such, you always want to make sure that you are properly inflated at all times.

Never floor when taking off in your semi truck.

Gentle accelerations will help to conserve your fuel, thus improving your economy.

If you’re going to be parked for an extended period of time, it’s always better to shut off your engine rather than let it idle.

This will help improve your fuel efficiency considerably.

Stay in Higher Gears When You Can

Lower gears hog up precious fuel, so always try to stay in the highest gear possible.

But when you can, you will start to notice that your truck is getting better fuel efficiency.