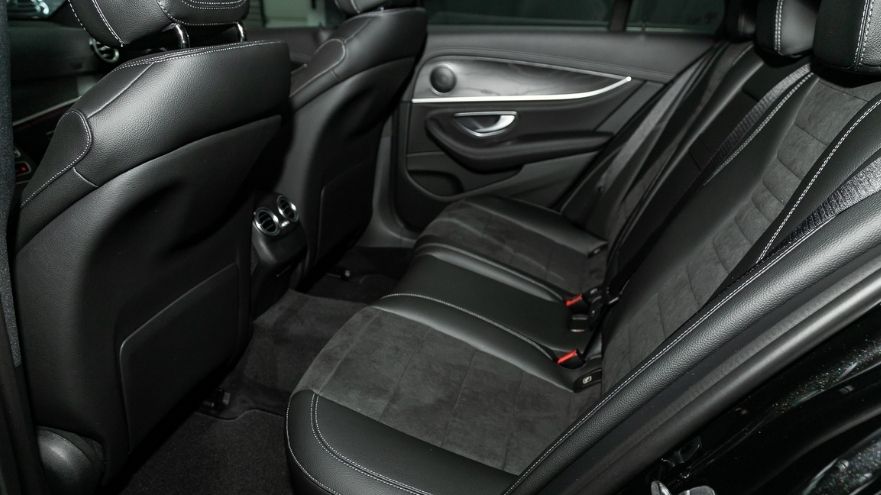 Driving in a sports car doesn’t have to be a two-person show, as several excellent four-seater sports cars are available.

If you love sports cars but want one that allows you to share the driving experience with four or five people, you’re in luck.

This article will look at 10 popular sports cars with back seats.

It’s almost impossible to think of a sports car without picturing the iconic Porsche 911. This storied car has set standards that many sports cars strive to match. And every version continues to improve its mix of elegance, power, performance, and reliability.

The Porsche 911 is a 2+2 car. These cars generally have standard-sized front seats but much smaller rear seats. Those rear seats are meant for children and occasional use. So they’re usually tight and comfortable for adults to sit in.

The Ford Mustang is another truly iconic car in the super community. It entered the market at a time when affordable, high-performance cars weren’t a thing, and it became an instant success.

This American Muscle car is quite large, boasting a competitive cargo space of 13.5 cu-ft. However, it’s also a 2+2 car, meaning its rear seats are best suited for children and average-height adults. The front legroom measures 45.1 inches versus its smaller rear legroom of 29 inches.

Note that some models of the Mustang—such as the Shelby GT350R—even delete the back seat entirely.

Unlike many of its rivals, the GranTurismo is a four-seater. The car’s roomy interior provides enough comfort for two adults in its front and back seats. The front/rear legroom in its 2019 version measures 41.7/30.1 inches.

The GranTurismo also features Maserati’s Easy Entry system. This handy feature enables you to move the front seats forward and back electrically, making it easy for passengers to access the rear seats.

The BMW M240i is one of the relatively inexpensive sports cars on this list, and it’s famous for its fantastic handling, luxurious interior, and pleasant roar.

Despite being a small car, the M240i is quite roomy, measuring 41.8/32.2 inches for its front/rear legroom. That’s not a lot of room, but it’s enough to keep four average-height adults comfortable during long rides, as this owner attests.

Most people agree the rear seats are comfortable enough for adults up to 6-foot tall. However, getting in and out of the back seat can be tricky because the M240i is a 2-door coupe.

It’s worth adding that the M240i is a strict four-seater— it has no middle rear seatbelt.

The Audi TT RS draws in you with its sleek and high-end exterior. It keeps you going with its plush interior and distinctive engine sound. Finally, it locks you in its web with its fantastic handling.

In fact, there’s a yellow sticker slapped on the passenger door, warning that anyone more than 5 ft. tall shouldn’t try to get in. Still, you can fit your adolescent kids, furry friends, luggage, and shopping bags in your rear seats. And that’s better than nothing.

The Aston Martin DB11 is another car that offers a great blend of beauty and performance. Aston Martin’s Executive Vice President rightly described its 2022 version as a piece of sculpture. Just one glance at the car, and you’ll be grinning from ear to ear.

The DB11 offers 2+2 seating. So its rear seats are cramped and best reserved for luggage than people. The rear headroom and legroom are so tiny that even children may find them confining.

Still, if you want a car that turns head and attracts attention, you can’t go wrong with the Aston martin. Just make sure you are ready to write a cheque of about a little over $200,000.

The Lexus LC coupe grabs attention with its curvy body that looks slightly different from competing supercars. The Lexus’s interior is high-quality, too, with a sophisticated infotainment system, a subwoofer, and twelve speakers.

The Lexus LC’s rear legroom of 35.2 inches is one of the most generous rear legroom offers on the sports car market. The front seat is also roomy, having a legroom rating of 42 inches.

The Porsche Taycan is Porsche’s first EV. And it stands tall, offering the kind of elegance typical of Porsche vehicles. From a sleek exterior to a minimalistic cockpit and state-of-the-art interior, this car is sure to make anyone fall in love.

The standard Taycan is a four-seater. It also offers an optional fifth seat in its second row.

Although the Taycan offers enough space for six-footers in its front row seats, the rear seats aren’t as comfortable or usable.

For one, its low and sloping roofline makes for small rear headroom. Also, its rear legroom would feel tight for anyone above 5’8 ft. Therefore, its rear seats are reserved for children or average-height adults.

The Mercedes-AMG GT 53 is an exotic four-door sedan with bold styling, a futuristic cabin, and an infotainment system that puts it in the upper class of the four-seater sports car class.

The GT 53 passes as a practicable car available in four-seater and five-seater options. And with a rear legroom rating of 35.5 inches, it offers enough legroom for six-footers. However, passengers may struggle a bit for rear headroom due to the car’s sloping roofline.

Taller owners also complain that the entryway to the rear seats is narrow.

The Dodge Challenger is the most distinctive car on this list in terms of exterior design. It’s also believed to be the most powerful muscle car, having engine performance specs that give its more expensive rivals a run for their money.

What’s more, the Dodge challenger is considered the most practicable car in the supercar class. It seats five people comfortably, boasting front legroom of 42 inches and back legroom of 33.1 inches. It also has a decent cargo volume at 16.2 cu-ft.