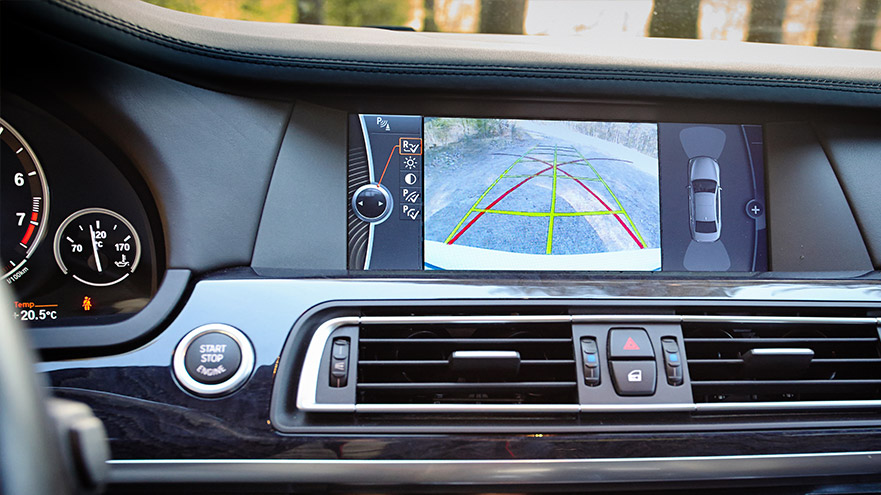 Bird’s eye view uses four cameras mounted on different sides of the car to create a live 360-degree view of the car’s surroundings, allowing drivers to get in and out of parking spaces with absolute ease.

This camera system works together with another exciting Toyota feature called the Perimeter Scan, which enables the driver to see possible obstacles from all angles and reduce the risk of collision.

If you’re wondering which Toyota models have this new technology, you’re in luck.

In this article, we’ll look at which Toyota models have Birds Eye View technology and the exact trim levels you need to select.

The Toyota Camry is currently the most popular sedan in America and the second best-selling vehicle produced by the Japanese brand. Since its debut back in 1983, the midsize family car has been a mainstay in the US automotive industry. Its impressive success in the market is thanks to its reputation for reliability, safety, and high resale value.

Another great thing about the Camry is its excellent fuel economy, rated 28 mpg city and 39 mpg highway. It features an attractive roomy interior, comfortable seating for five people, and an array of desirable high-tech features, including the bird’s eye view camera system.

This driver-assistant technology is first offered on the 2017 model of the Toyota Camry, and it’s available on select trims of the latest edition of the car.

The bird’s eye monitor system comes as an option on the XLE, XLE V6, XSE, and XSE V6 models of the Camry. But you cannot enjoy this feature on other trim options, including LE, SE, SE Nightshade Edition, and TRD.

Introduced in the year 2001, the Toyota Highlander is among the company’s oldest vehicles that are still sold today. This three-row SUV is widely revered for its practicality, comfort, and frugal gas mileage, which allows drivers to cover long distances on a single fill.

It has a spacious interior that can accommodate up to eight people and enough room for all the cargoes you may need for your next family trip.

Like many other models from the manufacturer, the Toyota Highlander also comes with an array of advanced technology features to keep both drivers and passengers safe while on the move.

The bird’s eye view camera system was first used in the 2017 model of the Highlander and is included in the newest edition of the vehicle.

However, only the higher trim options – Limited and Platinum – come with this helpful technology. And there is no option to have the panoramic view system added on other trim levels, such as LE, XLE, and Bronze Edition.

If you are considering buying a used Highlander, make sure you know which years to avoid.

The Toyota Avalon is one of the best full-size sedans available on the market. For many years now, this vehicle has been a top contender in the large car segment, thanks to its long history of reliability and exceptionally good gas mileage.

It comes with a stylish cabin, comfortable seating for five people, and a host of innovative technologies to ensure your safety and convenience while on the road.

Certain trims of this four-door car also feature an all-wheel drive, which allows for better traction and handling on any kind of surface. The Avalon is surely a decent pick for anyone looking for a cozy, fuel-efficient car that can get the job done.

While the Toyota Avalon also has the bird’s eye view system, it only comes standard on the highest trim level of the car, the Platinum model.

Other trims either offer the camera system as an option (Limited and Limited Hybrid) or not at all (Touring, TRD, XLE, XLE Hybrid, XSE Hybrid, and XSE Nightshade).

With over 400,000 units sold per year, the Toyota Rav 4 has been one of the company’s best-selling vehicles in the last decade.

It offers two rows of comfortable seats, large cargo space, and a long list of safety and convenient features. The compact SUV also excels when it comes to fuel efficiency, with an EPA rating of 28 mpg city and 35 mpg highway.

Other highlights of the Rav 4 include an all-wheel drive to help you easily maneuver the vehicle on slippery surfaces and the user-friendly infotainment system to keep you connected and entertained during trips.

The 2022 model of the Toyota also features the bird’s eye view monitor system, but it is only available on the top trim option, the Limited version. Other trim levels of the crossover, including LE, XLE, XLE Premium, Adventure, and TRD off-road, do not come with this nifty technology.

The Toyota Sienna is a respected name in the minivan category. This two-row family vehicle comes with a roomy cabin, well-padded seats for eight people, and ample cargo space to carry all the luggage you may need for your weekend or longer trips.

One of the best things about the Sienna is its excellent fuel economy. It has an EPA rating of 36 mpg both in the city and on the highway, allowing you to travel hundreds of miles without needing to stop for gas.

This van also packs plenty of attractive features that would appeal to any tech-savvy buyer, such as the bird’s eye view camera system.

However, only the Platinum trim of the latest Toyota Sienna comes standard with this exciting safety feature. It is not available on other trim levels of the vehicle, including the LE, XLE, XSE, Woodland Edition, and Limited versions.

The Toyota Venza is a mid-size hybrid SUV that was first introduced in the early 2010s. It comes with a chic roomy cabin, comfortable seating for up to five people, and a wealth of high-tech features for owners’ safety and convenience. The vehicle’s biggest appeal is its thrifty fuel economy, rated 40 mpg highway and 37 mpg city.

However, the Venza has less cargo space compared to its cheaper rivals, such as Jeep Grand Cherokee and Hyundai Santa Fe. But it’s still a pretty decent choice for those looking for a luxurious, pleasant-riding vehicle sold at an affordable price.

The Toyota Venza features the bird’s-eye view camera system, but it’s only available on the highest trim, the Limited version. Other trim levels of the crossover, i.e., LE and XLE, do not offer this smart technology, and there’s no option to have it included.