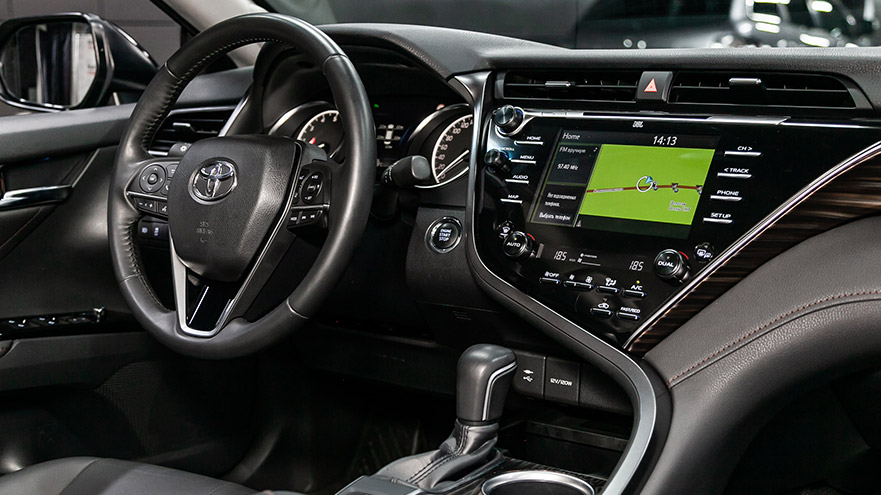 First introduced in the 2012 Toyota Prius, Entune has become a common feature in almost every Toyota model.

This slick infotainment technology allows users to connect their smartphone to their car, providing easy access to their favorite apps, music, text messages, and navigation displays, without being distracted by having to fiddle with the display.

In this article, we’re going to look at which Toyota models come with entune, as well as when Entune was introduced for each model (just in case you’re considering buying a used Toyota)

So, Which Toyota Models Come With Entune?

Since then, it’s gone through numerous iterations, with the latest versions (Entune 3.0) being released on select models. Entune 3.0 has a different operating system to the previous versions, so it is not compatible with any apps or integrations you may have had on your old Entune system.

Most newer models of Toyota will have some version of Entune. Below is a table showing each Toyota model, which years have entune, as well as which models have the latest version.

Below is a run down on some of the more popular Toyota models that come with Entune:

The Toyota Camry needs no introduction. America’s most popular sedan is known for its roomy interior, comfortable ride, and reassuring reliability. Another selling point of the Camry is its excellent gas mileage, allowing users to travel far and wide on a single fill. Until recently, the Toyota Camry was the best-selling passenger car in the United States, a title it has now lost to Nissan Rogue.

The 2014 model was the first Toyota Camry to come with the Entune technology, and it is available on all eight trim levels, including LE, SE, SE Nightshade Edition, XLE, XSE, TRD, XLE V6, and XSE V6.

Now in its 12th generation, the Toyota Corolla is one of the best-selling cars ever produced. This is partly due to its affordable price tag and long-standing reputation for reliability. This compact four-door vehicle comes in two body styles: sedan and hatchback, and has continued to impress with its comfortable front seats, smooth ride, and high-fuel efficiency.

Entune was first available in Corollas 2017 model of the car and is offered on all trim levels, including

The Rav 4 is one of the earliest crossover SUVs made by the Toyota brand. It features a nice spacious interior, intuitive controls, and offers a comfortable ride on all terrains. The compact SUV also has a decent fuel economy for a vehicle of its class and a generous amount of tech goodies that would interest any informed car buyer.

Entune was first included in the 2014 edition of the Toyota Rav 4 and comes standard on all the six trim levels of the vehicle, including LE, XLE, XLE Premium, Adventure, TRD Off-Road, and Limited.

With comfortable seating for up to eight people, the Toyota Sienna meets all the needs of a large family that’s always on the move. This two-row minivan comes with a luxurious interior, spacious cabin, a bevy of convenient and safety features. One of the biggest selling points of the Sienna is its excellent fuel economy, which allows you to stay more on the road and spend less time stopping for gas.

The Toyota Venza has more to it than just looks. This mid-size SUV comes with comfortable seating for up to five people, a standard all-wheel drive (AWD), and a decent fuel economy compared to other vehicles in its category. It also boasts a stylish, roomy interior and a wide range of advanced innovative features to keep you safe, comfortable, and entertained during trips.

The Entune multimedia technology was first included as an option in the 2013 version of this popular model. Users of the latest edition of the Toyota Venza can enjoy this entertainment feature on their vehicle, regardless of their trim level.

Released in 1997, the Prius is Toyota’s first hybrid vehicle to be produced on a large scale and is still one of the best-selling cars in its class today. This hatchback is known for its incredible fuel economy, reliability, and smooth ride. It has comfortable seating, a huge cargo hold, and a long list of convenience and safety features that would interest any tech-savvy buyer.

The 2012 Toyota Prius is the first car from the brand to include the Entune multimedia system. This technology is now available in all eight trim levels of the vehicle, namely L Eco, LE, LE AWD-e, XLE, XLE AWD-e, Nightshade Edition, Nightshade Edition AWD-e, and Limited.

The Toyota Highlander is one of the longest-standing vehicles produced by the Japanese brand. Since its debut in 2001, the mid-size SUV has been praised for its stunning roomy interior, comfortable seats for five people, and impressive fuel economy. It also packs plenty of desirable infotainment features, including the Entune system, to keep passengers entertained and connected to the outside world.

Toyota started including this innovative multimedia technology in the 2014 model of the Highlander. All variants of the newest model of this vehicle are equipped with Entune.

Launched back in 1994, the Toyota Avalon is the largest front-wheel sedan in the company’s lineup. This vehicle has a reputation for reliability, comfort, and great fuel economy. It features a roomy premium cabin, five comfortable seats, and a generous amount of innovative tech goodies any car owner would appreciate.

Entune multimedia technology was first added in the 2013 version of Toyota Avalon, and it’s available in all five trim options of the latest model, namely XLE, Nightshade, Limited, Touring, and TRD.

The Toyota Mirai is the first fuel-cell-powered vehicle to enter mass production. Available only in California, this luxurious mid-size sedan can compete well with the best EV and gasoline models. It comes with a posh roomy interior, comfortable seating for five people and a host of convenience and safety features. This sporty car drives just like big electric vehicles and emits only water.

Toyota first introduced the Entune system in the 2016 model of the Mirai, and all users of the newest version of the car can enjoy this amazing feature.

Also called the Coupe High Rander, the Toyota C-HR is the most compact crossover in the Japanese automaker’s lineup. This vehicle combines the driving experience of a sedan with the elevated seating position of an SUV. It offers a spacious interior, five comfortable seats, and an impressive fuel economy – rated 27mpg city and 31 mpg highway.

The 2018 Toyota C-HR is the first model of this car to come with the Entune multimedia system, and all the three trim levels boast this infotainment technology.