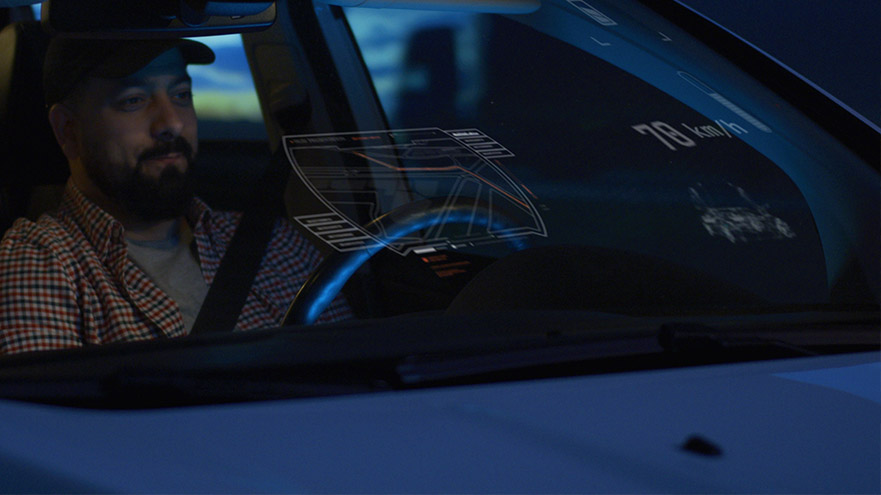 Head-up display (HUD) projects vital information, such as the vehicle’s current speed, weather, and navigation on the windshield, allowing drivers to keep their eyes on the road.

So if you are looking for Toyota models with this advanced safety feature, look no further.

In this article, we look at every model in the Toyota lineup that comes with a Head-Up display.

The Toyota Camry may have been dethroned as the best-selling sedan in the US, but it’s still a popular choice among tech-savvy buyers. The mid-size vehicle continues to impress car lovers, thanks to its roomy interior, comfortable seating, and excellent gas mileage. It also packs plenty of safety and convenience features, such as a 10-inch Color HUD display.

Not all trim levels of the Toyota Camry have head-up displays, though. You can only get this top-of-the-line feature as an option on four-cylinder Toyota Camry XLE and Camry XSE models. But it comes standard on high-end trims run by V-6 engines.

Also called the Toyota Kluger, the Highlander is a mid-size crossover SUV known for its comfort, practicality, and appealing design. It has a spacious interior, comfortable seating for about eight individuals, and decent gas mileage for a V-6 engine-powered vehicle.

The three-row family SUV comes with a wide range of desirable infotainment and safety features, including a 10-inch HUD display, which reduces the need to look away from the road to get important information.

However, only the more expensive platinum trim level (both the hybrid and non-hybrid versions) has a head-up display. So, you cannot benefit from this advanced driver-assistance feature if you are using any other trim level of Toyota highlander.

Nicknamed the granddaddy of all crossovers, the Toyota Rav 4 is one of the best-selling vehicles in the US and all around the world. This compact SUV boasts a nice spacious interior, two rows of comfortable seating, and a long list of safety and convenience features. It also has easy-to-use controls and a decent fuel economy that helps you stay on the road for longer.

New models of the Toyota Rav 4 come with a head-up display, although it’s only available on the Prime SE and Prime XSE trims. The safety feature is lacking in other trim options of this car, including LE, XLE, XLE Premium, Adventure, TRD Off-Road, etc.

The Toyota Sienna is among the top-ranking models in the minivans category. Known for its comfortable interior and good safety ratings, this large minivan is a decent pick for those looking for a vehicle that can haul a bunch of people and cargoes. It boasts a slew of versatility and technology features and an excellent fuel economy, allowing you to travel a long distance with a single fill.

Like many other vehicles from the brand, the Toyota Sienna boasts an array of driver-assistance features, including a 10-inch color head-up display, which ensures additional confidence on the road. This amazing technology is only available on the Platinum trim level of the minivan. Other models don’t include a head-up display, and there’s no option to have it added.

Launched in 1997, the Toyota Prius is the first gasoline-electric hybrid car to enter mass production and remains a best-seller in its category today. This funky hatchback offers comfortable seating, a large cargo hold, and a host of safety and convenience features any tech-savvy car owners would love. Among them is the 10-inch color head-up display, which shows key information right onto the windshield.

However, not all trim levels of Toyota Prius have this aircraft-inspired technology. It is not included on L Eco, LE, and LE AWD models. So, you will need to choose high-end trims like XLE, Limited, and XLE AWD if you are looking for a Toyota Prius car with a head-up display.

The Toyota Venza is a mid-size SUV known for its high efficiency and stylish look. This sleek family cruiser comes with five comfortable seats, an all-wheel-drive (AWD), and a hybrid powertrain, which guarantees a quiet and pleasant ride. It also has a spacious interior, great fuel economy, and a slew of innovative features that are sure to meet your needs.

Head-up displays are also included in this Toyota model. But it is only available as an option on the top-tier trim of the car – the limited version. Users of other Toyota Venza trim levels cannot benefit from this amazing technology as of writing.

The Toyota Avalon ranks number one in the large car category, thanks to its swanky interior, smooth ride, and a slew of standard innovative features. This full-size sedan has a spacious and premium cabin, comfortable seats, and a decent fuel economy for a car of its size. Sadly, the 2022 model is the last Toyota Avalon we’ll ever get to see as the company has announced it is ending the production of this vehicle due to decreasing popularity of large sedan cars.

The latest editions of this popular model include a 10-inch color head-up display, but only those using the Touring and Limited trim levels can enjoy this feature. XLE and the hybrid versions of the car don’t have a head-up display, and there is even no option to have it added.

Introduced in 2014, the Toyota Mirai is the world’s first hydrogen-powered electric vehicle to be produced on a large scale. This sedan car emits only water and drives like a modern electric vehicle without needing to be charged. It has a posh spacious interior, comfortable seating for up to five people, and loads of driver assistance and safety features.

Head-up displays (HUD) are available on the 2022 model of Toyota Mirai. However, only the Limited trim level includes this advanced feature. The XLE version does not come with a head-up display, and it cannot even be added as an extra.

The Toyota Supra is one of the best luxury sports cars on the market. It boasts a snug and premium cabin, well-cushioned seats for two people, and a bevy of intuitive tech features. Other selling points of the Toyota Supra include its great fuel and punchy acceleration, which makes driving a lot more fun.

Toyota also includes the head-up display technology in this model to keep their drivers’ eyes focused on the road.

Unfortunately, only one (the 3.0 Premium) has this feature. It’s not available on other trim options of the car, such as the 2.0, 3.0, and A91-CF Edition, and you cannot even have it included if you so desire.