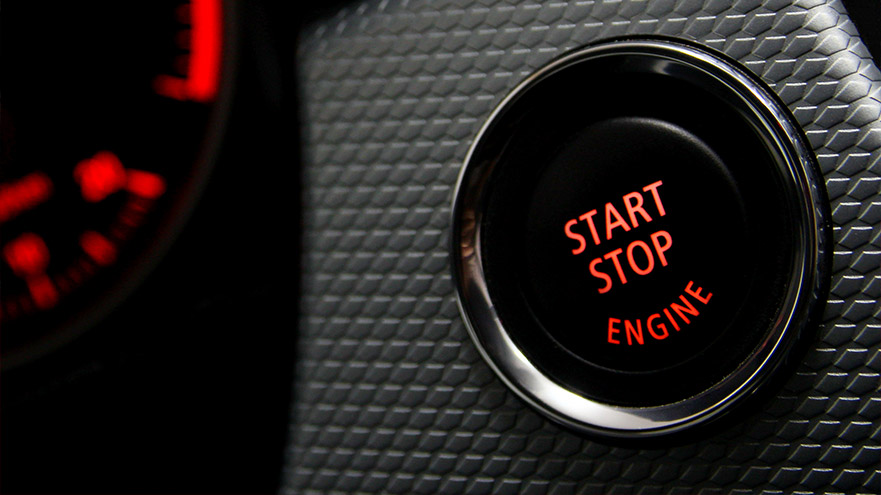 Push-button start simplifies the way a car is turned on or off.

However, not all Toyota models come with a push-button start.

In this article, we look at every Toyota model that comes with push-button start technology.

The Toyota Rav4 is the best-selling Toyota model in the U.S and the best-selling vehicle outside the traditional big trio of full-size pickup trucks (Ford F-Series, Ram, and Chevrolet Silverado) It offers plenty of practicality in an affordable package, as well as excellent resale value.

Push-button start functionality was first introduced to select RAV4 trim levels back in 2009.

While the Toyota Smart Key System is standard in entry-level RAV4s, its functionality is limited in base LE models. Only XLE and above trim levels get the push-button start system.

RAV4 trim levels that do not include push-button start:

The Toyota Camry’s sales are still surprisingly strong despite the fact we’re living in the age of crossovers. The affordable yet reliable family sedan offers great bang for the buck and won’t be going out of style anytime soon by the looks of things.

The push-button start system is available across the Camry range, albeit only as an option in the base LE and SE trim levels. The hybrid LE and SE models offer it as standard, however.

The rather expensive Toyota Highlander is one of the most family-appealing Toyota crossovers thanks to its third row of seats and plenty of cargo space. It also benefits from a generous amount of convenience and safety gear which is always a plus in the segment it competes in.

Needless to say, the push-button start system is also included, and from the get-go at that. Even the entry-level L trim Highlanders benefit from this practical feature.

The Toyota Tacoma is a capable workhorse with solid off-road credentials, superb reliability, and relatively good mpg. However, most of its competitors are slightly more refined. Furthermore, the likes of Ford Ranger, Jeep Gladiator, Chevrolet Colorado, and GMC Canyon all provide superior towing capacity.

Somewhat lacking in extra features, the entry-level Tacoma SR and SR5 trims don’t offer the push-button start system. Furthermore, you also won’t find it in higher grades if you opt for a manual gearbox.

Tacoma trim levels that do not include push-button start:

The best-selling car in history wouldn’t be where it is today if it didn’t offer a well-rounded package geared towards reliability and affordability first and foremost.

Even though it might appear almost spartan compared to some larger modern cars, the Corolla still offers the push-button start system across most of its range. Opt for a hatchback and it’s standard across the range. Choose a sedan, however, and you won’t get it in the base L trim. The LE trim offers the push-button as an option, while all the above grades provide it as standard.

Sharing the same platform as the Tacoma pickup truck, the Toyota 4Runner offers a more rugged take on the mid-size crossover segment. As a true SUV, it might not be the most refined vehicle in its class, but it makes up for it in off-road capability and by providing a generous amount of interior space. Just keep in mind that it offers fairly poor gas mileage.

A push-button start is standard across the entire 4Runner range, and so are numerous driver assistance features. The interior refinement, however, leaves a lot to be desired.

One of the best people and cargo haulers on the market provides an unparalleled amount of cargo space with the rear two rows of seats folded. It’s also one of only two minivans on the market that offers all-wheel drive alongside the Chrysler Pacifica.

The full-size pickup truck offering from Toyota is slightly more expensive than its traditional U.S. counterparts but makes up for it by providing well-established Toyota reliability, longevity, and high resale value. That said, it does offer below-average game mileage.

The push-button start system is standard across the Toyota Tundra range which was to be expected for a vehicle that starts from north of $37,000.

The most successful hybrid car in history is still defying the odds by recording respectable sales figures despite the electric revolution. Its fuel economy isn’t as revolutionary as it used to be, but it’s still the one to be beaten.

Both the conventional Toyota Prius and slightly more expensive Prius Prime come with a standard push-button start system regardless of a chosen trim.

An all-new model with an old nameplate would be one way to describe the mid-size Toyota Venza crossover. In truth, while fuel-efficient and practical, the Venza feels redundant in an already deep Toyota crossover and SUV lineup. Especially since there are better options for the money elsewhere.

At least all trim levels offer the standard Smart Key System with a push-button start.

Other Toyota Models With Push-Button Start

Corolla Cross trim levels that do not include push-button start:

Being one of the leaders in the automotive industry, it comes as no surprise that Toyota is utilizing helpful technology such as a push-button start system across most of its range.

In fact, every single model within their lineup gets this feature that’s been a part of Toyota’s amenities for over a decade now. Only an odd entry-level model or two still relies on a traditional key fob ignition, and that’ll probably change sooner rather than later.