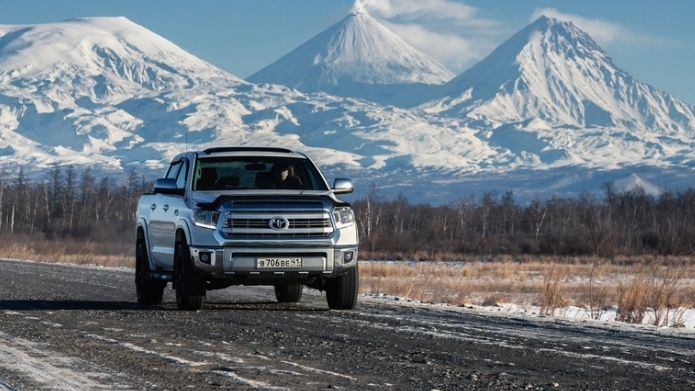 As a truck, Tundras don’t get the same type of gas mileage that typical cars get — especially the fuel-efficient Toyota models.

In this article, we’ll answer some of the most common questions asked about the Toyota Tundra’s mileage.

How Much Gas Mileage Does A Toyota Tundra Get?

The Toyota Tundra achieves a gas mileage of between 15 or 16 miles per gallon (MPG) combined between city and highway driveway.

This is slightly below the average for a truck this size (around 17.5 MPG).

City fuel mileage for the Tundra is typically around 13-14 MPG.

So if you do most of your driving in stop-and-go traffic around the city, you can expect to get this type of fuel economy.

But if most of your driving is on the highway, it jumps up to around 18-19 MPG.

The gas mileage seen in the table below is from the Department of Energy’s official source for fuel economy information:

Over the past decade (and even longer), the Tundra has used the same 5.7L V8 engine in the most common models.

So the fuel economy has not changed much at all.

The Toyota Tundra gets poor gas mileage. According to the EPA, the average fuel economy for all new vehicles produced in 2019 was 24.9 MPG.

Considering the 2019 Toyota Tundra gets about 16 MPG, that isn’t very good — more than 35% below the national average.

However, according to the Department of Energy, the average fuel economy for vans and light trucks is 17.5 MPG.

In its own class, the Tundra is only 8.5% below the average, which is still not terribly great.

How Does Toyota Tundra Gas Mileage Compare To Similar Trucks?

The Toyota Tundra gets the worst gas mileage out of all of the trucks in its class, rated at 10 MPG in the city and 20 MPG on the highway.

Check out the numbers below, gathered from Consumer Reports:

Although the Tundra has the worst gas mileage in its class, it’s only one MPG below the others in the city, so it isn’t really much of a difference.

The ~4 MPG on the highway is nearly 20% worse than its competitors though, so it’s worth keeping that in mind.

How Many Miles Can You Drive Toyota Tundra on One Tank Of Gas?

The Toyota Tundra has a fuel tank capacity of 26.4 gallons and achieves 15 MPG on average. Therefore, you can expect to drive a Toyota Tundra 396 miles on one tank of gas before you run dry.

No matter what kind of driving you do, we don’t recommend running it completely dry like that, so on average, you’ll likely go around 300-350 miles between fill-ups in your Tundra.

What Is The Toyota Tundra Gas Mileage While Towing?

On average, you can expect to get around 7-10 MPG from a Toyota Tundra while towing.

The gas mileage that your Tundra gets while towing will heavily depend on a few things, such as how much you’re hauling, how fast you’re driving, and what the terrain is.

As one Tundra owner described on this thread, they get around 9-10 miles per gallon while towing 7,500 pounds on flat ground.

Another owner on the same thread said that they typically get about 7-9 MPG while they’re towing ~7,000 pounds with their Tundra.

Like with any other Truck, you can help increase your Tundra’s gas mileage while towing by maintaining good driving habits — more on that towards the end.

Why Is My Toyota Tundra Getting Bad Gas Mileage?

There are several reasons why your Tundra might be getting bad gas mileage. Low tire pressure, clogged fuel filter or fuel pump

When Will Tundra Get Better Gas Mileage?

According to MotorTrend, the Toyota Tundra is expected to receive a complete redesign in 2022, which could bring with it the highly-anticipated hybrid option that will certainly offer better gas mileage.

The Tundra has had the same general design since 2007, with just a facelift in 2014.

It’s long overdue for an updated model, and you can expect to see one later this year when the 2022 model years roll out.

If Toyota does offer a hybrid Tundra as fans are hoping, you can expect a massive increase in fuel economy.

Fans are speculating upwards of 25+ MPG could be possible, although no official word has yet been released from Toyota.

What is Considered High Mileage For a Toyota Tundra?

High mileage for a Toyota Tundra is generally considered to be anything over 200,000 miles.

However, if a Tundra is properly maintained, you can expect to get many more miles than this.

Take a look around at some of the Tundra forums, and you’ll see countless people getting that much or significantly more out of them regularly.

For example, quite a few Tundra owners on these threads discuss the Tundras that have over 200,000 miles on them with no issues.

Most agree that 200,000 and up is where “high-mileage” starts to become a thing, although you should have no issues.

There’s even a well-known Tundra out there with over a million miles, just give you an idea of what’s possible!

How Can I Get Better Gas Mileage On My Toyota Tundra?

Here are simple tips to get better gas mileage on your Toyota Tundra.