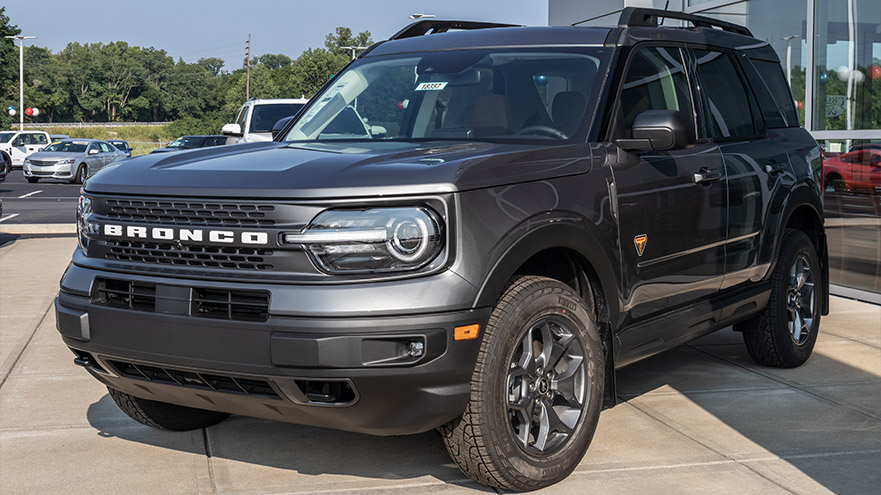 The Ford Bronco is much-loved in the US, thanks to its appealing looks, excellent off-road capabilities, and a long list of high-tech features.

One feature we love about newer Bronco models is that they come with a removable top.

Depending on the model and trim level, this vehicle either has a retractable soft roof or a solid removable top to keep out elements.

If you’re thinking about buying a Ford Bronco and are wondering which models have a removable top, you’re in luck.

In this article, we’ll talk about every Bronco model that comes with a removable roof and the exact trim levels where this feature is available.

The new Ford Bronco is one of the most sought-after SUVs in recent years. Since it was

reintroduced after a 25-year hiatus, this off-roader has been drawing the attention of auto buyers due to its all-terrain prowess, ruggedness, and good looks. It boasts standard four-wheel drive, powerful engine options, and many intelligent tech features that would excite any outdoor lovers.

Available in two or four-door configuration, this Bronco model has an optional slide-out tailgate that can be used as a table or seat and an 8 or 12-inch infotainment system to keep occupants connected to the outside world during trips.

The two-door model of the new Ford Bronco has a removable hardtop, while the four-door version comes with a soft folding top. This is true for most trims of the vehicle, such as Badlands, Base, Big Bend, Outer Banks, and Black Diamond.

However, the Wildtrak and the First Edition models always have a removable solid roof, whether it is a two-door or four-door vehicle.

Bronco Everglades is an exciting addition to the Bronco SUV family. This vehicle is specially equipped with additional off-road equipment to help owners go further off the trail. Aside from beefier mud-terrain tires, it also features an exterior snorkel air intake, which improves the vehicle’s water-fording capacity.

Like the Bronco Raptor, the Everglades model is also available only as a four-door, and it uses a turbocharged four-cylinder engine that delivers a respectable output of 300 horsepower (HP) and 325 pound-feet of torque. This “monster” also packs plenty of safety features, like reverse sensing and many other driver assistance systems.

Other key highlights include a 12-inch infotainment system and four-wheel drive for excellent traction and performance on any kind of terrain.

The 2-door model of the Bronco Everglade has an easy-to-remove hardtop, while the 4-door model comes standard with a soft folding top. The soft top can be partially folded or completely taken off for an enhanced open-air experience.

The Bronco Raptor has been described as the ultimate off-road Bronco. It is designed to move quicker, climb rocks more easily, and fly higher than other models. This high-performance vehicle features hip-hugging seats, long-travel suspension, and loads of standard safety technologies, including blind-spot monitoring, automatic high beams, lane-keeping assist, etc.

It also boasts a powerful 3-liter V6 engine, a large touchscreen display, and the biggest tires you will see on any SUV vehicle. These massive tires provide the traction needed to cover rough terrains quickly and confidently.

The four-door only Bronco Raptor also comes with a removable hard roof, allowing you to catch the sun’s rays and feel the breeze when out in the wild.

Does Bronco Sport come with a removable top?

The Bronco Sport is the smallest and least expensive of all the Broncos. Since its debut in 2020, this vehicle has been receiving praise for its comfortable ride, impressive off-road capability, and fuel efficiency. It features a well-designed interior, comfortable front seats, and a large cargo space that can accommodate your coolers, backpacks, and gear without having to force them in.

This crossover is equipped with a three-cylinder base engine or a punchier four-cylinder powerplant, depending on the trim level. It also boasts standard all-wheel drive, several safety tech features, and GOAT (go over any terrain) driving modes that allow you to navigate difficult terrains with ease.

Another great feature is the flip-up glass rear window, which provides easy access to the trunk without having to raise the tailgate.

Unfortunately, the Bronco Sport does not come with removable roof panels. Instead, it boasts a safari-style roof with a standard roof rack, allowing you to place some cargoes on top of the vehicle and providing more headroom for your tall people.