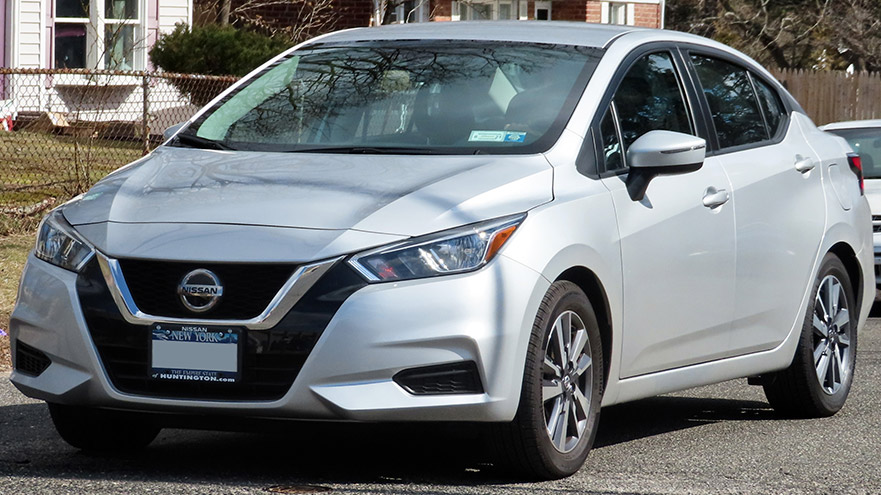 The Nissan Versa is one of the cheapest cars in America, costing up to 60% less than the average price of a new car.

If you’ve been looking at buying a new or used Versa, you may be wondering exactly why they are so cheap compared to other cars.

So, why are Nissan Versas so cheap?

Nissan Versas are cheap because they are small, basic cars with very few fun driving features. The engine lacks the power to do much more than a grocery run, but they are built to be inexpensive and so some trade-offs like this should be expected to an extent.

Keep reading for a full list of reasons why the Versa is so cheap, and if they are worth buying.

3 Reasons Nissan Versas Are So Cheap

Check out the following three factors that all help to keep the cost of this famously inexpensive car low.

The Nissan Versa is a subcompact car, a vehicle size class that tends to put affordability front and center.

As such, this class of car tends to cost less to appeal to buyers on a budget.

Somewhat unsurprisingly given its reputation as one of the cheapest cars around, when it comes to comfort, Nissan doesn’t pack many high-end features into the Versa.

You won’t find luxurious leather seats and top-of-the-range trim materials, and lots of the interior is made of plastic; all of which contribute to the lower price tag.

Another reason that the Versa is cheap is due to its rather uninspiring engine.

With between 109 and 122 horsepower (depending on the model), it has enough power for everyday driving, but by opting for a standard, functional engine instead of something more performance-driven, Nissan has kept costs low.

Its 0-60 time of 9.6 seconds also demonstrates its lack of muscle, and some reviews mention the need to be patient when overtaking on the highway.

Are New Nissan Versas Worth Buying?

New Nissan Versas are worth buying if you require a basic car to travel short distances in regular driving conditions for as little money as possible.

Otherwise, drivers have commented on its lack of power, meaning that it is impractical for use in varied terrain (such as mountains or hills), and can be extremely slow when setting off or speeding up, for example when joining a highway.

What’s more, Consumer Reports’ reviews of the past three models of the car, highlight the Versa’s clumsy handling and noisy engine as well as it being pretty uncomfortable.

Yet Car and Driver loved the 2022 Versa and rated the 2021 version highly too, suggesting that the newer models are better to drive than some of the previous iterations.

This is after not recommending the 2017 edition to buyers outright, so it appears as though the designers at Nissan have been doing something right.

Despite its low cost, the Versa comes equipped as standard with important safety features, such as a collision warning system and dynamic brake support, leading to a five-star safety rating from the National Highway Traffic Safety Administration.

The fuel economy is good but not incredible since similar cars can equal or better the Versa’s 32 mpg.

Whether or not a Versa is worth buying all comes down to whether you are a driving enthusiast: serious drivers will feel like the Versa leaves a lot to be desired, but cars in this class are not often built nor known for their driving prowess – value is the priority here.

And when it comes to value, the Nissan Versa sits pretty towards the top of the rankings.

Do Nissan Versas Have a Lot of Problems?

You don’t have to look hard for reports from owners who have had problems with their Versas.

The car’s transmission seems to be a particularly sticky issue, with numerous complaints describing costly repairs due to the well-known faults with the Versa’s transmission system.

However, if you can look past the transmission trouble, the Versa is a good car that you can rely on to get you from A to B.

Why Are Used Nissan Versas So Cheap?

Used Nissan Versas are so cheap because, in addition to starting out as one of the least expensive new cars available, they don’t hold their value well as they age.

In an analysis of the resale values of popular cars, Versa’s original price was found to depreciate by almost a third after three years and nearly a half after five years.

Are Used Nissan Versas Worth It?

The question of whether a used car is worth it is always subjective to an extent, and in the case of a used Nissan Versa, considering the cheap price, it should definitely be worth it as long as you are prepared to cover any necessary repairs that may arise.

As with buying any used car, there is always the risk that the previous owner didn’t perform the required maintenance, leaving the new owner to foot the bill for anything that might need doing.

One reviewer suggested that this is more likely to happen in Versa’s case, as the people who tend to purchase it new are less inclined to properly maintain and care for the car.

It is also worth bearing in mind that older Versas were rated as being more basic and as having potentially worse transmissions than the latest versions, so it is highly likely that any used Versas for sale at the moment will be these “lesser” models too.

Final Thoughts – Why Are Nissan Versas So Cheap?

Nissan Versas are cheap because they are simple, subcompact cars with no frills that are designed to be bought and run on a budget.

They aren’t the fastest, the most powerful, or stylish cars, but they are practical for getting you where you need to go within the city.

Subcompact cars don’t often top lists of the most exciting vehicles, but within that size class, price is a very important factor.

The Versa, therefore, fits right into this affordable profile, yet with the changes that Nissan has made to the recent models, it looks like its stock is set to rise even further.