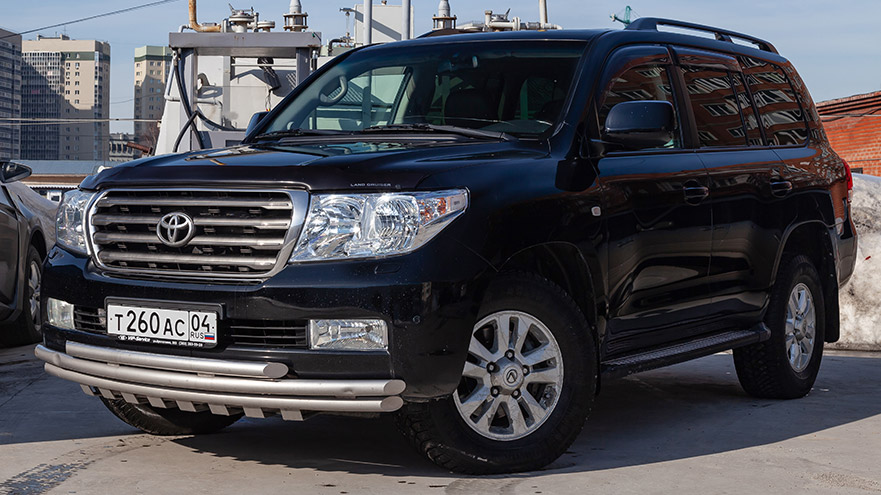 The Toyota Land Cruiser is one of the most legendary off-road luxury vehicles in the world, known for its remarkable durability and longevity.

If you’re looking to buy a new (or used) Land Cruiser, you’ve probably noticed that they are exceptionally expensive.

So, why are Toyota Land Cruisers so expensive?

Toyota Land Cruisers are so expensive because they are built like tanks, they last forever, they keep a high resale value, and they are classed as luxury vehicles.

If you’re thinking about purchasing a Land Cruiser, continue reading to see why they’re so expensive and if they’re worth the price.

5 Reasons Why Land Cruisers Are So Expensive:

Let’s take a closer look at why Land Cruisers are so expensive.

One of the most common words used to describe the Toyota Land Cruiser is “indestructible”.

They are famous for being put through the wringer again and again without showing any true signs of struggle or stress.

This rugged durability comes at a cost.

2. Their Reliability Is Legendary

Like most Toyotas out there, the Land Cruisers can pretty much last forever.

They commonly last for 200k to 300k miles, and some have even been reported lasting 400k miles or more.

This reputation for reliability has naturally led to an explosion in popularity.

3. They Hold Their Value Well

Even as Toyota Land Cruisers start to get a little older and the miles start racking up, they typically hold their prices well.

This allows drivers to get their use out of them and then resell it for a similar price.

4. They Can Go Anywhere

The Land Cruiser was designed to be able to handle just about any terrain, and that’s exactly what they can do.

Toyota regularly tests the Land Cruiser in the Australian Outback, which is believed to be one of the toughest terrains for vehicles in the world.

This is reflected in the fact that the Land Cruiser is Australia’s number 1 selling 4×4 truck.

This makes it a favorite among serious off-road adventurers that have a little extra money to spend.

5. They Are Classed As Luxury

Even though it wears a Toyota badge, the Land Cruiser can definitely be classed as a luxury vehicle, and its price tag reflects that.

Take the time to sit in one and you’ll see why Toyota is able to get away with calling it luxury.

Why Are Old Toyota Land Cruisers So Expensive?

Old Land Cruisers are so expensive because they’re indestructible, they are well-maintained, and seem to last forever. Land Cruisers hold their value well and are expensive to start with, so even old ones are still going to be expensive a few years down the line.

As a Toyota, Land Cruisers are highly regarded as being able to just about last forever.

So even when they cross the 100,000-mile mark, many people consider them as just getting started.

Not only that but they’re built like tanks and are pretty much indestructible, as evidenced by multiple responses.

If something is going to last for a long time while offering reliability and dependability, it will tend to hold a higher price.

Multiple users talk about Land Cruisers commonly getting 300,000 miles or more, with one even going over 600,000 miles!

Land Cruiser parts are quite a bit more expensive than the prices you would pay for a smaller car or even most trucks. This is for two main reasons — the Land Cruiser is expensive from the start and it’s important to keep it in tip-top shape so that it can perform off-road.

Since the Land Cruiser was designed for off-road use, it’s important that its systems are kept well-maintained so that it can perform as expected.

This means that the price for parts can be raised accordingly.

But when you compare the Land Cruisers to other vehicles within its own class of SUV, the annual repair costs are reasonable.

Check out the average maintenance costs below with data gathered from RepairPal:

The Toyota Land Cruiser and the Lexus are almost identical in average annual maintenance cost, which makes sense since they’re closely related.

The annual cost of maintaining the Range Rover or the Mercedes-Benz GLS is about 50% more than a Land Cruiser.

Toyota Land Cruisers are not expensive compared to similar SUVs, but they aren’t cheap either. In fact, when compared side-by-side with four of its closest competitors, the Toyota Land Cruiser’s base model pricing ($85,665) puts it right in the middle of the pack.

Check out the rest of the values below, gathered from Consumer Reports as the base model MSRP:

Although the Toyota is almost the exact same price as the Lexus LX, keep in mind that both vehicles are made by Toyota.

The LX is a slightly more luxurious version of the Land Cruiser, so it might be worth spending the extra money on one!

Is the Land Cruiser Overpriced?

For the vehicle class that it’s in, the Toyota Land Cruiser is not overpriced. But when you take into account the fact that all of the comparable SUVs in the same class are high-end luxury brands, the Land Cruiser could be considered overpriced.

You typically think of those brands when you think of luxury vehicles, not Toyota.

For the price, you’d almost always be better off going with its cousin — the Lexus LX.

Is The Toyota Land Cruisers Worth The Money?

If you’re going to use it for what it was really designed for — traversing just about any terrain out there — then yes, the Toyota Land Cruiser is worth the money. But if you’re just going to be driving it on the roads like a normal vehicle, you could get something far more affordable.

Coming from people who have actually purchased and driven them as their own, Land Cruisers are worth the money.

Why Is The Land Cruiser More Expensive Than The Sequoia?

The Land Cruiser is more expensive than the Sequoia because it’s more versatile and it’s also technically a luxury vehicle. The Sequoia is a bit more like a truck, clunky and clumsy. The Land Cruiser can handle any terrain while offering drivers refinement and luxury.

First and foremost, the interior of the Land Cruiser is much nicer than what’s found in the Sequoia.

According to a report by Autotrader, the Land Cruiser has an updated infotainment system, perforated leather seats that are heated and air-conditioned, and more.

All things that the Sequoia does not offer.

Combined with the upgraded interior and more modern appeal, it all adds up to the Land Cruiser being more expensive than the Sequoia.